Ukraine leader says Biden should have met him before Putin summit 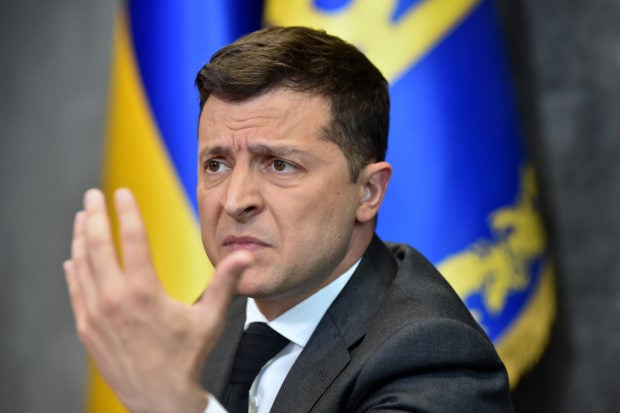 KIEV — Ukrainian leader Volodymyr Zelensky said on Monday that Joe Biden should have met him before the US president’s first summit with Russia’s Vladimir Putin as they could resolve nothing on Ukraine without Kiev’s involvement.

Zelensky spoke as the US and Russian leaders prepare to meet in Geneva on Wednesday.

Earlier this month Biden reaffirmed US support for Ukraine’s territorial integrity and invited Zelensky to the White House in July.

“It would be better to have this meeting before the summit,” Zelensky, 43, said in an interview with three international news agencies, including AFP.

Zelensky said he did not expect Putin and Biden to come up with a solution to Ukraine’s conflict at the summit.

“It is not possible to decide for Ukraine,” he said. “So there won’t be a concrete result.”

On Friday, the Pentagon announced a new $150 million (124 million euro) package of military assistance for Kiev.

After a lull last year, fighting escalated at the start of 2021 and in April Russia amassed 100,000 troops near the Ukrainian border and in Crimea, prompting warnings from NATO.

Russia later announced a pullback, but both Washington and Kiev say that the withdrawal has been limited.

“Any escalation could lead to a conflict,” he said. “If the number of troops near our borders has increased this could result in a massive war.”

The conflict in eastern Ukraine — including the escalation of tensions over the past few months — is expected to be high on the agenda in Geneva.

– ‘Not nice’ – Speaking in Russian and Ukrainian during the hour-long interview, Zelensky said his country was ready to join NATO.

“We are fighting a war. This is proof we are ready to join.

“We are proving every day that we are ready to be in the alliance more than most of the EU countries.”

The Ukrainian president also accused the West of being unwilling to discuss in detail Ukraine’s aspirations for NATO and EU membership.

“I believe this is not nice,” he said.

“When you bang your head against the wall for seven years, saying ‘well, you see that there’s a war, can you support us?’ and you get an answer ‘we support the desire, but…’, you can get unwillingness in a few years,” Zelensky said.

Ukraine, which applied to join the US-led alliance in 2008, is pressing Western powers for more support as it seeks to deter any new aggression from Moscow.

But NATO members remain reluctant to embrace Ukraine as they want to avoid ratcheting up tensions with Russia.

Kiev has already criticised the bloc’s decision not to invite Ukraine to a NATO summit in Brussels on Monday.

Zelensky expressed his disappointment in the “tiredness” of Kiev’s Western allies with his country’s problems, accusing them of being “unfair” to Ukraine, when it comes to questions of joining the EU, the distribution of vaccines against the coronavirus or financial assistance from the International Monetary Fund.

Instead of constantly demanding reforms as a condition of support, “everyone must be more flexible and understand that we are at war and that we are protecting democracy in Europe”, he said.

Zelensky also accused Russia of delaying his proposed meeting with Putin to discuss the conflict in eastern Ukraine.

“I believe that today — I don’t know the reasons for it — they are delaying this meeting,” the Ukrainian leader said, expressing hope that a date would be set soon.

“I believe that a meeting with the Russian president is unavoidable.”

In April, Zelensky invited Putin to meet in eastern Ukraine but Putin appeared to shoot down that offer, saying the Ukrainian leader was welcome in Moscow “any time”.

Putin also stressed that Zelensky should discuss the conflict in eastern Ukraine with separatists directly.

Kiev has been battling pro-Russia separatists in the eastern Donetsk and Lugansk regions since 2014, following Moscow’s annexation of the Crimean peninsula. The war has claimed more than 13,000 lives.

Kiev and its Western allies accuse Russia of sending troops and arms to support the separatists, which Moscow has denied.