Manila completes construction of COVID-19 Field Hospital ahead of schedule 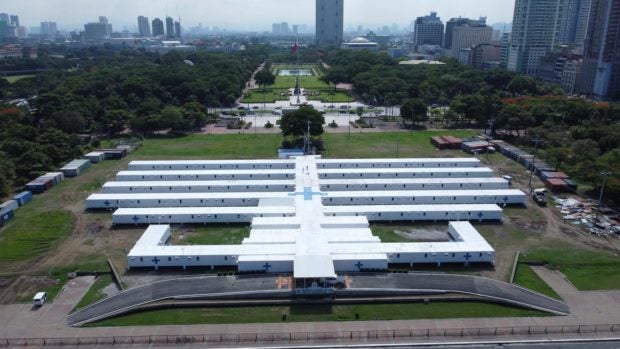 An aerial shot of the completed Manila Field Hospital, which will cater to cases of COVID-19. Contributed photo

MANILA, Philippines — The Manila city government has completed the construction of its COVID-19 Field Hospital in Luneta ahead of its 60-day target deadline.

Manila City Mayor Francisco “Isko Moreno” Domagoso thanked all the workers that helped in the construction of the 4,402-square-meter hospital as it was declared completed in just 52 days.

(To those whose nails got ruined, got burned, poked by wire, got splinters from plywood, hit by hammer because even though it’s dark already work continued, I just want to share this to you that we have succeeded. Our promise of 60 days, we were able to do it in 52 days.)

(You have become part of this construction, you are part of the history that Filipino workers are the best. So to all of you, please accept my heartfelt gratitude.)

Domagoso said that the sacrifices the workers made to meet the project’s tight deadline was a gift to the people of Manila and the medical frontliners whose burden would be lessened.

The Manila COVID-19 Field Hospital intends to decongest the city’s six district hospitals from mild and moderate COVID-19 cases as it has a 344-bed capacity. It also has a budget of P154 million.

While Domagoso gave tribute to the efforts of the workers, he said that fellow city government officials will continue its part to address the COVID-19 situation in the nation’s capital.

(We will try our best to be good, neat and efficient in serving you. We will never ever abandon you. We have a government in the city of Manila, side by side with the people of Manila.)