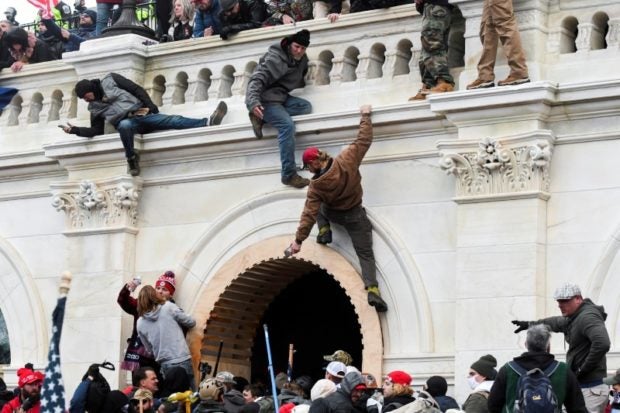 FILE PHOTO: Supporters of U.S. President Donald Trump climb on walls at the U.S. Capitol during a protest against the certification of the 2020 U.S. presidential election results by the U.S. Congress, in Washington, U.S., January 6, 2021. REUTERS/Stephanie Keith/File Photo

WASHINGTON — A Virginia couple on Monday pleaded guilty to demonstrating unlawfully in the U.S. Capitol during the Jan. 6 attack, a misdemeanor with a sentence of up to six months, in a plea deal that could set a benchmark for hundreds of other cases.

Jessica and Joshua Bustle of Bristow, Virginia were the first to reach such an agreement with prosecutors on a misdemeanor charge. They admitted during a court hearing that they violated a federal law that prohibits “parading, demonstrating, or picketing” inside the Capitol without proper authorization, according to a court filing.

U.S. District Judge Thomas Hogan in Washington, who oversaw Monday’s plea hearing, will sentence the Bustles at a later date.

The Bustles have agreed to pay $500 apiece in restitution.

Their sentence will likely act as a precedent for hundreds of defendants also facing charges of misdemeanors — lesser crimes than the felonies that instigators are facing — in the Jan. 6 riot by former President Donald Trump’s supporters.

More than 450 people have been charged with taking part in the attack, which followed speech in which Trump falsely claimed his election defeat was the result of fraud. The violence that followed left five dead.

The Bustles are the third and fourth defendants to plead guilty in the sprawling investigation stemming from the attack on the Capitol.

The first guilty plea came in April, when a founding member of the right-wing Oath Keepers, Jon Schaffer, pleaded guilty to two felony charges of obstructing the certification of the 2020 election and breaching a restricted building.

Prosecutors are recommending a sentence of between 3-1/2 and 4-1/2 years of prison time for Schaffer, but his sentence will ultimately be decided by a District of Columbia judge.

A Florida man on June 2 became the second person to plead guilty to storming the Capitol. Paul Allard Hodgkins pleaded guilty to one felony count of obstructing an official proceeding.

A judge said federal sentencing guidelines call for Hodgkins to receive sentence in the range of 15 to 21 months.