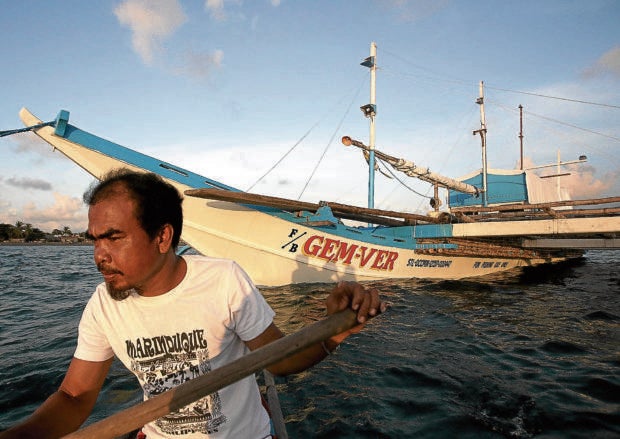 The newly-repaired GemVer 1 docks at Barangay San Roque I, Occidental Mindoro and ready to sail again to Recto Bank, West Philippines Sea, five-months after it was rammed and sank by a Chinese Vessel that almost killed the 22 fishermen.
INQUIRER FILE PHOTO / RICHARD A. REYES

The Occidental Mindoro-based crew members of the fishing boat Gem-Ver I are hoping to finally receive compensation as they marked two years since their vessel was rammed by a Chinese trawler in the West Philippine Sea.

Arlinda dela Torre, owner of the since-repaired boat, and the crew, including her son Felix, are seeking P12 million for the Gem-Ver I’s sinking by Chinese trawler Yuemaobinyu 42212 on June 9 that year. They sought the assistance of the Philippine government to claim compensation.

The fishing boat was anchored at Recto Bank, 269 kilometers west of Palawan province, sometime before midnight, when it was rammed by the Chinese trawler, which then abandoned the crew members of Gem-Ver I in the open seas. They were rescued some two hours later by a Vietnamese fishing boat passing through.

On Aug. 28, 2019, some two months after the sinking, the Guangdong Fishery Mutual Insurance Association issued an apology on behalf of the owner of the Yuemaobinyu 42212, whom the group did not name, for what it called an “accident” and asked the Philippines to file a claim for compensation.

In September last year, the Department of Justice set P12 million as compensation, covering repair costs, loss of income during the six months it took to repair the Gem-Ver I, and civil and moral damages.

On Monday two of the crewmen said in a phone interview with the Inquirer that they were contacted by a lawyer, through the boat owner, and were made to sign documents which indicated how much they would receive.

Jimmy Gordiones, the boat mechanic, said he was informed he would receive P280,000 as compensation.

Another crew member, Vernel Agustin, said he would be granted P264,000.

Agustin also said he was informed that the other crew members would be getting about the same amount.

The two men said they would meet again with the same lawyer, whom they did not name, on June 20.

The signing of the documents took place as some 15 other crew members gathered in the town of San Jose in Occidental Mindoro to each receive P15,000 in financial assistance from the Department of Social Welfare and Development in the province.

Reached by phone on Monday, Dela Torre said she cried with relief when she learned that compensation was now being processed.

Her daughter-in-law, Fhaye dela Torre, said: “The money will be a big help for us, especially with the pandemic.”

“We just want everyone to get by,” she added.

According to Fhaye dela Torre, seven of the 22 crew members of Gem-Ver I have moved on to other livelihoods.

She said they feared being harassed by the Chinese or, worse, getting killed.

“Some of the fishers have been traumatized and are not the same since,” she said.

One of them is Gordiones’ son, JP, the youngest member of the crew, whose wife gave birth at that time to their first-born daughter.

Gordiones, who used to earn a decent living from joining weeks-long fishing trips with Gem-Ver I, now supports his family through “pangangawil” or small-scale fishing near the municipal waters, which offers less.

Others have become construction workers, according to Dela Torre. But the rest have remained in the crew.

Romel Calingasan, municipal agriculture officer of San Jose, said this was “not because they were not scared… But the need to provide for their family is stronger.”

The Gem-Ver I is back at sea. The crew finished an expedition off the Spratlys two weeks ago and found a growing number of Chinese vessels stationed in the area.
The Department of Foreign Affairs itself has noted the presence of these ships since March and has filed a series of protests against China.

The crew said they just steered clear of these trawlers to avoid trouble, even if it meant longer nights out at sea and deeper waters to venture into to bring home enough catch.

Read Next
Local gov’ts may start COVID-19 vaccination of poor residents using excess supply
EDITORS' PICK
Hidilyn Diaz says China team hated her Chinese coach for hiding how good she is
Eumir Marcial dominates in Olympics debut with 1st round stoppage
Businesses need to enable employees to connect and work anytime, anywhere
Harnessing technology for quality education
Locsin, US defense chief to discuss ‘mutual security concerns’ in PH visit
Connect to PH’s fastest network with new Signature Plan Lite at only P599 per month
MOST READ
Hidilyn Diaz says China team mad at her Chinese coach for not sharing extent of her strength
Eumir Marcial dominates in Olympics debut with 1st round stoppage
NCR Plus under GCQ with heightened restrictions Aug. 1-15, Iloilo under ECQ until Aug. 7
Hidilyn Diaz loses phone, passport at NAIA but gets them back
Don't miss out on the latest news and information.