Facing North Korea, Imjingak Park is a reminder of peace on the Korean Peninsula 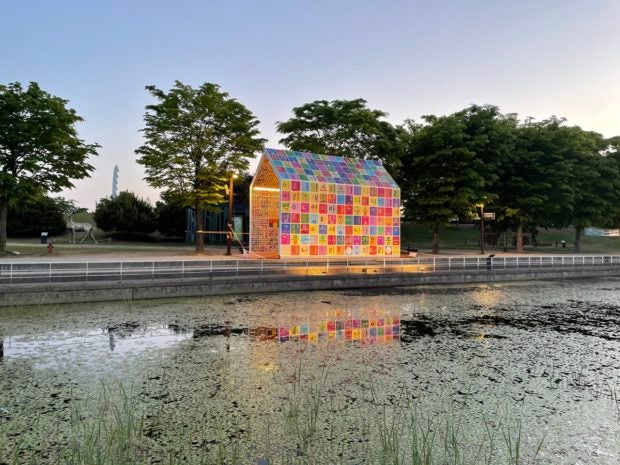 PAJU, Gyeonggi Province — A large peaceful ground, Imjingak Pyeonghwa Nuri Park stands facing the Imjin River, just south of the Demilitarized Zone. Although it sounds like an area of heightened tensions, the park is crowded with visitors, especially on weekends, who come for a picnic and to view the works of art on display.

The exhibition “DMZ Art Project: Peace, Again” shows works by 12 artists and collectives that deal with the theme of peace. The works that are scattered throughout the park include those by video artist Paik Nam-june, installation artist Kang Ik-joong, installation artist Chung Hyun and painter Song Chang.

In the middle of the vast grassy field, pioneering video artist Paik’s “Tiger Lives” is playing for the first time in 21 years since it was broadcast in 73 countries to celebrate the new century. Commissioned for broadcast on Korean television as part of millennium celebrations, Paik expressed his wish for peace on the Korean Peninsula and the digital revolution in the new era.

“The video was broadcast globally welcoming the new year of 2000, right after striking the Peace Bell 21 times located next to the park at midnight,” said art director Gim Jong-gil. “This is the first time since then that the 45-minute-video is being played in its entirety.”

The exhibition also aims to remind people of the key historic moments in inter-Korean relations, including the June 15 North-South Joint Declaration signed in 2000, he added.

“Until the late 1990s, Paju was a sort of scary place to live, and I used to live hearing gunfire in the town as we had many military bases here. But the place has become much safer as the (inter-Korean) tensions have eased,” said a Paju, Gyeonggi Province, resident of 20 years. 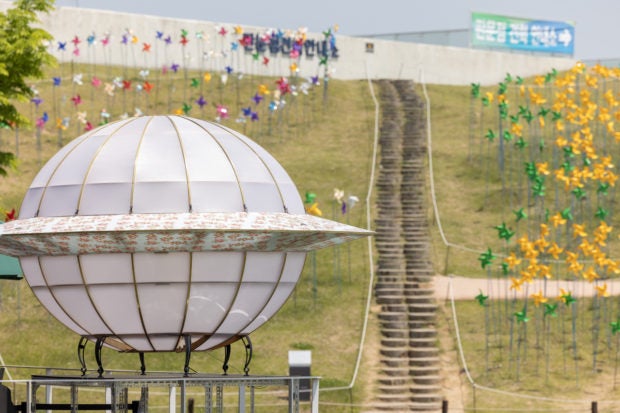 Near the entrance to the park, installation work “The Bridge of Dream,” by Kang Ik-joong, welcomes visitors. The installation is a house made of 7,000 children’s paintings that express their wishes. On the sides of the house are lyrics of Arirang, a Korean folk song.

Passing through the installation work, “Chandelier” and “UFO” by the artistic collective Seems Like Community are on display at the cafe in the park. Those works were created using products manufactured in the joint South-North Kaesong industrial park, which was once a symbol of cross-border cooperation.

“The artwork ‘UFO’ looks like a UFO, but it also resembles the pumpkin coach from the Cinderella story. The artists likened the Kaesong industrial complex as a party for the two Koreas, which is gone now,” Gim said.

Other works at the exhibition include paintings by Song Chang that were inspired by the division of the peninsula, wooden sculpture “The Standing Man” by Chung Hyun and “Traces of the Day,” a flag installation work by Choi Min-soo.