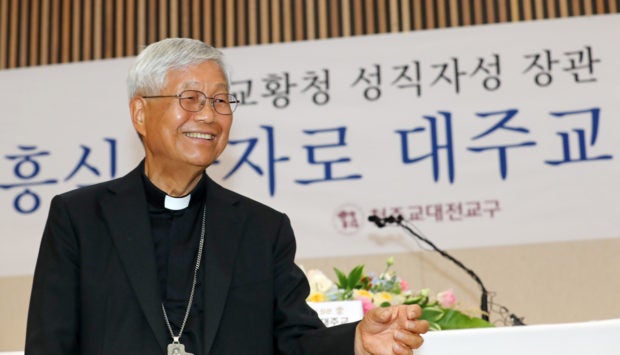 Bishop Lazarus You Heung-sik speaks during a press conference on Saturday, in Sejong, after his appointment as prefect of the Vatican’s Congregation of the Clergy was announced on June 11. Yonhap via The Korea Herald/Asia News Network

SEOUL — South Korean Bishop Lazarus You Heung-sik, the newly appointed Vatican prefect of the Congregation for the Clergy, said he will work toward arranging a visit to North Korea for Pope Francis if he is given the opportunity to do so.

“The pope had expressed his willingness to go to North Korea,” You, 69, said at a press conference held Saturday at the Daejeon Diocese, Sejong City, following the announcement of his appointment. “If North Korea invites the pope during these times when the country seems to face severe economic difficulties precipitated by international isolation, it will be a golden opportunity for the country to overcome the hardships,” he said.

Responding to speculations surrounding his appointment as a Vatican prefect at this time and whether the appointment is related to the situation in North Korea and China, You said the pope had told him while offering the post, that “there are two secretaries from African countries, but only one Asian prefect.” The Vatican also recognizes the elevated status of Korea and Asian continent, according to You.

“The minister is also a cleric, whose role is to assist and help priests around the world carry on their lives, and (to know) in what aspects they suffer, while looking after seminarians who are preparing to become priests,” You said.

He added that he would work to engage in dialogues with others, play an active role in situations when necessary, and make sincere efforts to train priests, looking beyond the borders of ethnicity and religion.

The article also pointed out that the appointment reflects the pope’s intention to expand the role of churches in the East Asian region. In addition, it also stated that You had built an amicable friendship with two Chinese bishops invited to the synod.

You was born in 1951 in South Chungcheong Province. He earned a doctorate degree in the field of Dogmatic Theology at Pontifical Lateran University, in 1983, and was ordained a priest for the Diocese of Daejeon.

You became the bishop of the Daejon Diocese in 2003, after serving as professor and president of Daejeon Catholic University. He traveled to North Korea on four occasions while serving as president of the Catholic Bishops’ Conference of Korea.

You will leave for Rome late July and start serving as a Vatican prefect early August. A prefect’s formal tenure is five years.