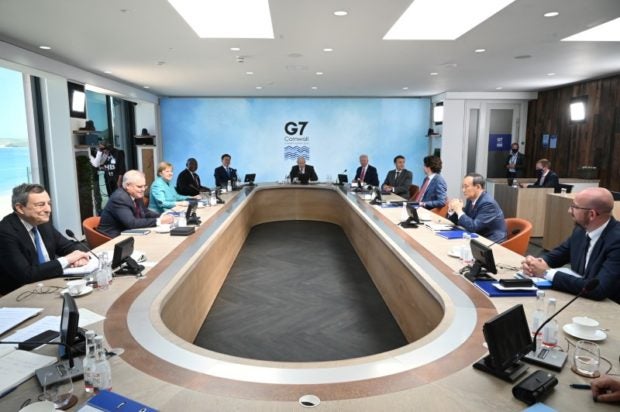 As part of plans billed as helping speed the finance of infrastructure projects in developing countries and a shift to renewable and sustainable technology, the world’s seven most advanced economies will again pledge to meet the target.

Some green groups were unimpressed, with Greenpeace UK saying the G7 host, British Prime Minister Boris Johnson, had “simply reheated old promises” and that it would take “nothing for granted” until nations came up with the money.

“Protecting our planet is the most important thing we as leaders can do for our people,” Johnson said in a statement.

“As democratic nations we have a responsibility to help developing countries reap the benefits of clean growth through a fair and transparent system. The G7 has an unprecedented opportunity to drive a global Green Industrial Revolution, with the potential to transform the way we live.”

It gave no details of or numbers for the new commitments.

Developed countries agreed at the United Nations in 2009 to together contribute $100 billion each year by 2020 in climate finance to poorer countries, many of whom are grappling with rising seas, storms and droughts made worse by climate change.

That target was not met, derailed in part by the coronavirus pandemic which forced the British government to postpone the United Nations’ Climate Change Conference (COP26) until this year.

G7 leaders are also expected to set out action to cut carbon emissions, including measures such as ending almost all direct government support for the fossil fuel energy sector overseas and phasing out petrol and diesel cars.

“The natural world today is greatly diminished. That is undeniable. Our climate is warming fast. That is beyond doubt. Our societies and nations are unequal and that is sadly is plain to see,” said British naturalist David Attenborough, the people’s advocate for COP26.

Attenborough will address leaders via video message on Sunday.

He said the question for 2021 was whether the world was on the verge of destabilising the planet. “If that is so, then the decisions we make this decade – in particular the decisions made by the most economically advanced nations – are the most important in human history.”

Greenpeace UK’s executive director, John Sauven, described the track record of rich nations in honouring their commitments as “dismal” and Johnson of failing to take “real action to tackle the climate and nature emergency”.

“While commitments to provide more support to developing nations are absolutely vital, until they cough up the cash, we’re taking nothing for granted,” he said in a statement.