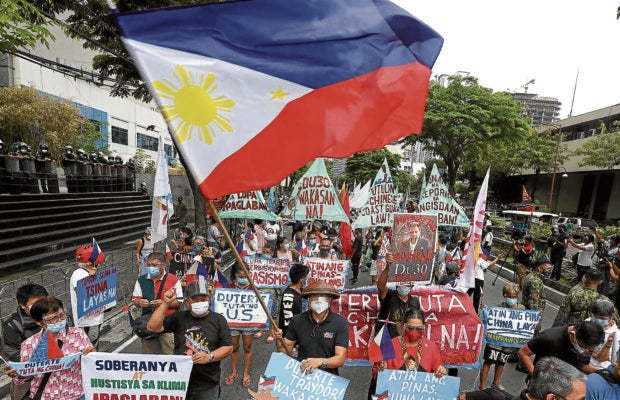 NEW COLONIZERS Activists stage a protest rally in front of the Chinese consulate in Makati City during the 123rd anniversary of Philippine Independence on Saturday. —MARIANNE BERMUDEZ

MANILA, Philippines — Hundreds of students, farmers, fisherfolk, scientists, and activists flocked to a Makati City building housing the Chinese consulate on Saturday to deplore what they said was President Rodrigo Duterte’s surrender of sovereignty to China as the country celebrated its 123rd Independence Day.

He cited statements and actions of Mr. Duterte that supposedly undermined the country’s position on the West Philippine Sea, despite securing a victory from the 2016 ruling of the international tribunal.

“The President’s policy is to appease China at the expense of the nation’s maritime zones and natural resources. This is not how an independent sovereign state should act. This is how a vassal state acts,” Carpio noted.

“On our Independence Day, we, the Filipino people, should vow to assert our sovereign independence and oppose any vassalage to, or appeasement of, any foreign power,” Carpio added.

The protesters gathered at the University of the Philippine campus in Diliman, Quezon City, on Saturday morning before making their way to the Chinese Embassy’s consular section at The World Center building on Gil Puyat Avenue.

The groups called for Mr. Duterte’s resignation over his failure to protect the country’s sovereignty.

According to Advocates of Science and Technology for the People, illegal Chinese activities destroyed 16,000 hectares of reefs in the West Philippine Sea as of 2017. They estimated the damage to reach up to P33.1 billion per year if the encroachment continues.

Farmers also demanded an end to China’s “imperialist aggression” in the country, with its “continued violations of Philippine sovereignty” under the Duterte administration.

“That the Duterte regime has willingly allowed China’s violations in the West Philippine Sea to continue unaddressed is an outrageous insult to the Filipino people of past, present and future,” said Zenaida Soriano, national chair of Amihan National Federation of Peasant Women.

“China’s actions are in clear violation of international law and severely jeopardize the Philippines on environmental, economic and political levels. Duterte’s blatant refusal to defend our national sovereignty against foreign aggressors makes clear that he is a coward and traitor to the Filipino people,” Soriano said.

The Kilusang Magbubukid ng Pilipinas (KMP) also slammed Mr. Duterte for “peddling the country’s territories and resources to China,” with more than P1.3 trillion in destruction and damages to our coastal waters.

“We are not really free and independent. Foreign dictates over our national economy, politics, culture and way of life persist,” the KMP said.

The peasant group added that unless the government’s “subservience to China” ends, “our resources will be depleted if Duterte remains in power beyond 2022.”