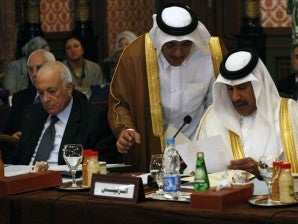 CAIRO — The Arab League called Sunday for the U.N. Security Council to create a joint peacekeeping force for Syria and urged Arab states to sever all diplomatic contact with President Bashar Assad’s regime, the League’s latest effort to bring an end to the violence that has killed more than 5,000 people.

Syria immediately rejected the moves, spelled out in a resolution adopted by League foreign ministers meeting in Cairo.

Saudi Foreign Minister Saud Al-Faisal conveyed the 22-nation League’s deep frustration with Syria, telling delegates that it was no longer appropriate to stand by and watch the bloodshed.

“Until when will we remain spectators?” he said. The bloodshed in Syria “is a disgrace for us as Muslims and Arabs to accept.”

Syria’s state news agency said the regime rejected the Arab League decisions, which were taken without a Syrian representative present. Syria’s ambassador to the Arab League, Ahmed Youssef, was quoted as saying that Saudi Arabia and Qatar were “living in a state of hysteria after their last failure at the U.N. Security Council to call for outside interference in Syria’s affairs and to impose sanctions on the Syrian people.”

The Arab League has been at the forefront of regional efforts to end 11 months of bloodshed in Syria. The group put forward a plan that Assad agreed to in December, then sent in monitors to check whether he was complying. When it became clear that Assad’s regime was flouting the terms of the agreement and the killings were continuing, the League pulled out the observers last month.

“The time has come for a decisive action to stop the bloodshed suffered by the Syrian people since the start of last year,” Arab League chief Nabil Elaraby told the Arab foreign ministers. “We must move quickly in all directions … to end or break the ongoing cycle of violence in Syria.”

The League called for the U.N. Security Council to adopt a resolution that provides for an immediate cease-fire in Syria, the protection of civilians and overseeing a humanitarian effort for victims of the violence. It demanded that regime forces lift the siege on neighborhoods and villages and pull troops and their heavy weapons back to their barracks.

It urged Syrian opposition groups to unite ahead of a Feb. 24 meeting in Tunisia of the “Friends of Syria” group, which includes the United States, its European allies and Arab nations working to end the uprising against Assad’s authoritarian rule.

The group was created after last weekend’s veto at the U.N. by Russia and China of a Western and Arab draft resolution that would have pressured Assad to step down. That resolution also would have demanded that Assad halt the crackdown on dissent and implement the Arab League peace plan that calls for him to hand over power to his vice president and allow creation of a unity government to clear the way for elections.

The League also said it wanted to provide Syrian opposition groups with political and material support. It called for a halt to all diplomatic contacts with Syria and for referring officials responsible for crimes against the Syrian people to international criminal tribunals. It urged a tightening of trade sanctions previously adopted by the League that have not been fully implemented.

The foreign ministers were also expected to consider a proposal by Gulf states to expel Syrian ambassadors from Arab capitals, but the resolution made no mention of that.

President Barack Obama’s chief of staff, Jacob Lew, said it was only a matter of time before Assad’s regime collapsed.

“The brutality of the Assad regime is unacceptable and has to end,” Lew told “Fox News Sunday.” The U.S. is pursuing “all avenues that we can” and “there is no question that this regime will come to an end. The only question is when,” he said.

The Syrian regime has long blamed terrorists for the revolt, and al-Qaida’s endorsement creates new difficulties for Western and Arab states trying to figure out a way to help force Assad out of power.

At the Cairo meeting, foreign ministers from the six-nation Gulf Cooperation Council proposed that all Arab League nations withdraw their ambassadors from Damascus and expel Syria’s ambassadors from their capitals, according to officials.

The proposal was not mentioned in the resolution, but the clause calling for a halt to all diplomatic contacts with Syria appeared to reflect a compromise.

The six Gulf nations, particularly Saudi Arabia and Qatar, have been campaigning for a tougher stand against Assad’s regime and may offer formal recognition of the National Syrian Council, the largest of Syria’s opposition groups.

Assad’s regime has pursued a harsh crackdown against the uprising since it began last March. More than 5,400 people have been killed, according to a U.N. estimate in January. That figure has not been updated because the chaos in Syria has made it all but impossible to do so, and hundreds have been reported killed since.