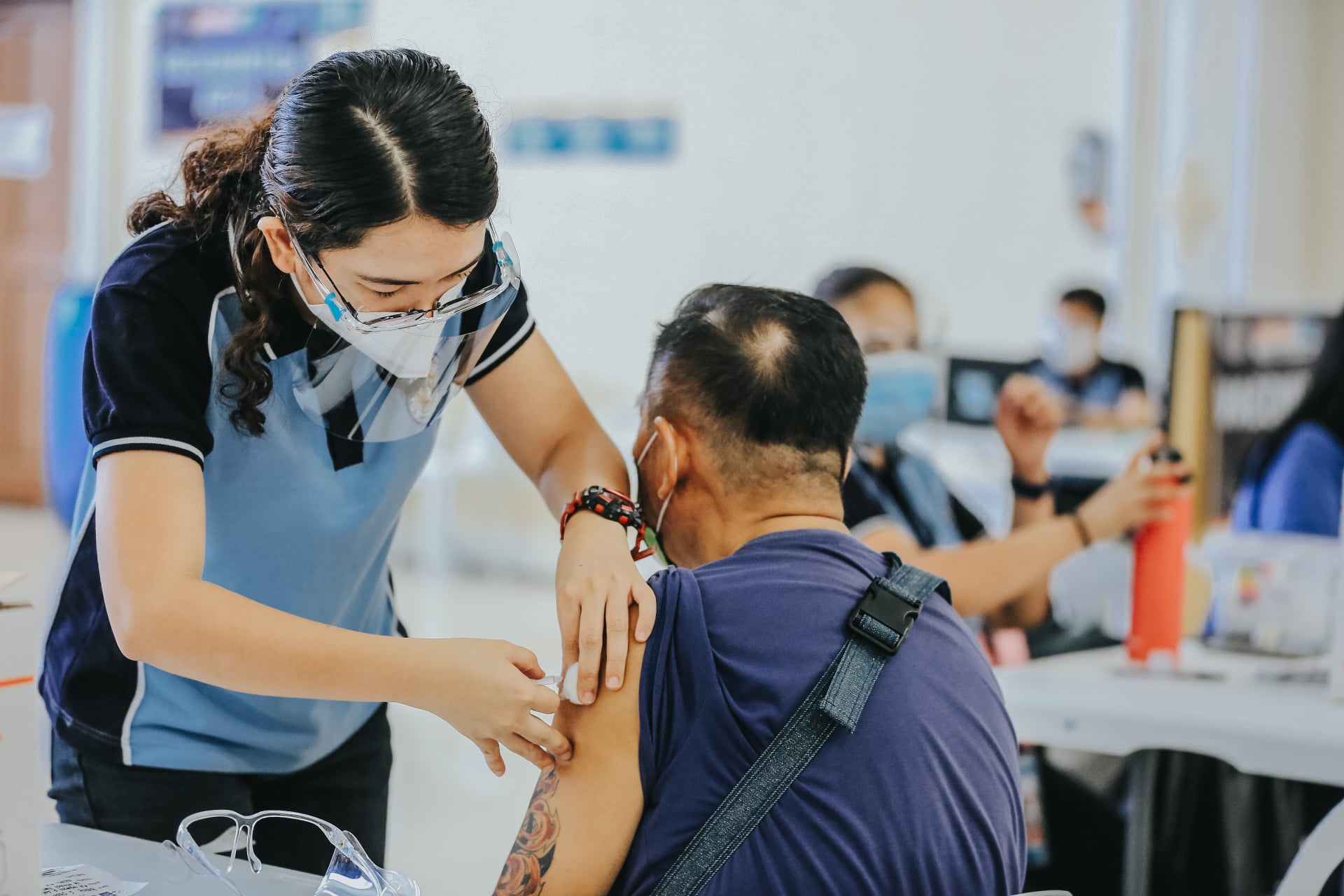 A city health personnel vaccinates an elderly man in Pampanga’s capital city on May 24. Photo from the City of San Fernando Information Office

MANILA, Philippines  — After a year of being confined at home, fully vaccinated senior citizens can now go out.

However, they could travel only within their zones or region and to areas under general community quarantine (GCQ) and modified general community quarantine (MGCQ), according to the Inter-Agency Task Force for the Management of Emerging Infectious Diseases (IATF).They also have to present their COVID-19 vaccination cards and observe the minimum public health standards, such as the wearing of face shields and masks, the IATF said in its Resolution No. 120 dated June 10.

Interzonal travel remains prohibited, except for point-to-point trips, such as to certain tourism areas that were previously allowed.

The IATF also approved the reopening of more establishments, including gyms, fitness centers and indoor noncontact sports venues, in the National Capital Region (NCR) Plus area, which covers Metro Manila and nearby provinces.

However, these venues, such as skating rinks and racket sport courts, could operate only at 30 percent of capacity and first get a safety seal certification from the government, presidential spokesperson Harry Roque said on Friday.

Trade Secretary Ramon Lopez said the relaxed restrictions would allow some 22,000 workers in the gym industry alone to return to their jobs.

The IATF also amended its guidelines for inbound international passengers who had been fully vaccinated in the Philippines.

The task force said the new guidelines required a shorter seven-day quarantine and would be effective starting June 16.The vaccination cards of the fully vaccinated individual must be verified prior to departure and a certification from the Department of Information and Communications Technology or the City Health Officer of the local government unit that administered the last dose would be needed prior to departure. This certification would then be presented to the Bureau of Quarantine for reverification at the Department of Transportation One Stop Shop upon arrival in the Philippines.

Aside from having a shorter quarantine, individuals fully vaccinated in the Philippines no longer need to undergo the expensive reverse transcription-polymerase chain reaction (RT-PCR) test unless they manifest COVID-19 symptoms during their quarantine.

Roque said the decision to allow more mobility for fully vaccinated senior citizens, including those above 65 years old who were earlier restricted to their homes, was based on science and meant to “incentivize vaccines.”

Franklin Quijano, chair of the National Commission of Senior Citizens, had said that allowing vaccinated senior citizens to go out would encourage other elderly residents to get inoculated.

Lawyer Romulo Macalintal also cited the same reason in previously calling for vaccinated senior citizens to be allowed to leave their homes and participate in more activities, such as joining religious activities and eating in restaurants.

A problem is that while senior citizens are a priority in the government’s mass immunization drive against COVID-19, only a small percentage of them have been vaccinated.

On Monday, vaccination chief Secretary Carlito Galvez Jr. said the 1.54 million senior citizens who have received their first dose of the vaccine represented only 15.54 percent of the target. Only 415,540 senior citizens have been fully vaccinated with two doses. Older persons are considered at higher risk of getting severe COVID-19, or dying from the disease.

Now that fully vaccinated senior citizens could go out of their homes, the government should ensure that barangay officials are “well-informed” about eased restrictions on elderly Filipinos, according to Senior Citizens Rep. Rodolfo Ordanes, pointing out that barangay officials need not scold senior citizens outside their homes or resort to violence in enforcing health protocols.

He said the confusion started when barangay officials and village watchmen were not made aware of new policies, recalling the confusion on whether “lugaw” was an essential or nonessential food item.

The chair of the House senior citizens panel said barangay watchmen could just calmly remind senior citizens to properly wear their face masks and shields when outside their residences.

“The problem arises when the ones enforcing protocol are acting like neighborhood bullies. There’s no need to resort to anger and violence in enforcing health protocols,” he said.

The easing of quarantine restrictions were due to improving COVID-19 numbers in Metro Manila, Bulacan, Cavite, Laguna and Rizal, collectively known as the NCR Plus area. It has been placed under GCQ with restrictions until June 15. —With a report from Julie M. Aurelio INQ