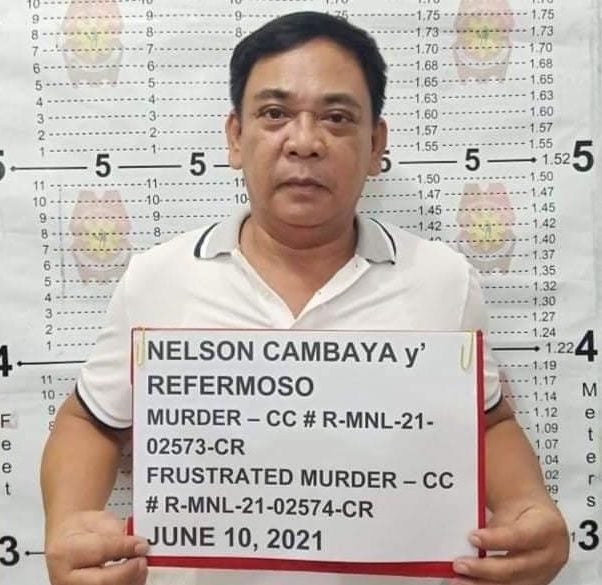 LEGAZPI CITY — The vice mayor of Batuan town in Masbate province who was one of the suspects in the killing of a former municipal official was arrested on Thursday afternoon in Mercedes, Camarines Norte province, police said.

Guadamor said Cambaya, who arrived on the island two weeks ago, was the subject of an arrest warrant issued by the Regional Trial Court Branch 42 in the National Capital Judicial Region issued on April 26 against Cambaya and six other suspects that included Sandra Cam and her son Marco Martin Cam, for murder and frustrated murder charges.

Sandra Cam, a board member of the Philippine Charity Sweepstakes Office, has surrendered to the police on April 29.

They were tagged in the killing of Charlie Yuson III, the former vice mayor of Batuan who was shot dead while in a canteen in Sampaloc, Manila, on Oct. 10, 2019.

Yuson’s two companions, identified as Wilfredo Pineda and Alberto Alforte, were wounded in the attack.

Cambaya, who won as councilor in 2019, assumed as vice mayor after the death of Charlie Yuson III.

Cambaya would be turned over to the court that issued the arrest warrant, said Guadamor.

Juvy Andrew Hedia, information officer of the Department of the Interior and Local Government in Bicol, said they had yet to receive the designation of Councilor Gilbert Bocboc to fill the temporary vacancy in vice mayorship.

Bocboc is the second highest-ranking councilor in the town. —MA. APRIL MIER-MANJARES