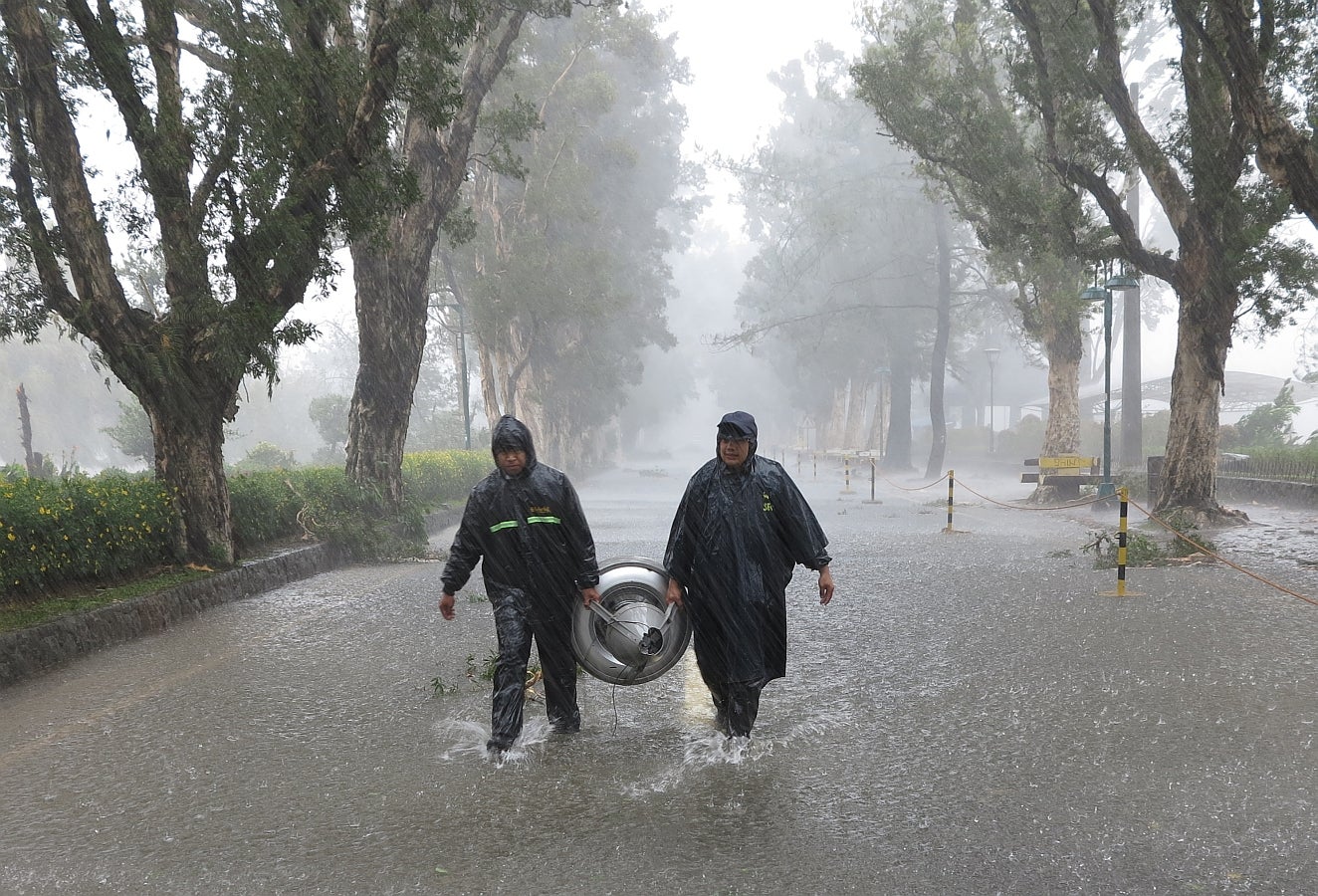 FLOOD INTHE PARK In this photo taken in 2015, heavy rain dumped by a typhoon floods a section of Burnham Park in Baguio City. A team of engineers and scientists is studying how to effectively tap rainwater to address the dwindling potable water supply in the city and the rest of the Cordillera. —EVESPIRITU

BAGUIO CITY — Local scientists and engineers are testing an idea for draining runoff rainwater directly into the aquifers of highly urbanized cities like Baguio, which has been rationing its daily supply for years.

The concrete pavements in many cities and urban areas prevent rain from being absorbed by the soil, a natural process for replenishing groundwater, said engineer Nathaniel Vincent Lubrica of the University of the Cordilleras.

This is because areas in the region paved with concrete are no longer permeable and runoff rainwater is carried instead by roads toward drains and rivers that flow down to lowland provinces. Experts, said Lubrica, will test artificial groundwater recharge facilities at Burnham Park and at the strawberry farms of neighboring La Trinidad town in Benguet province.

Lubrica is one of the project leaders of a collaborative study among Cordillera universities on the protection of watersheds and river systems to ensure that communities around the region will have sufficient supply of potable water in the future.

He also leads Program Boondock, which will develop a mountain engineering center that will study and resolve seasonal problems, like landslides that disturb food production and distribution, and derail the region’s economic growth.

These projects, worth P62 million and financed by the Department of Science and Technology, were launched on Tuesday.

The study team plans to bury an 8-inch diameter pipe into a test site at Burnham Park to direct runoff water to the aquifer.

Forester Darwin Ablang of the Watershed and Water Resources Research Development and Extension Center of the Department of Environment and Natural Resources said the collected rainwater would undergo a filtering process.

The field test takes into account the city’s average of 3,000 millimeters of rainfall each year—the highest in the country and an untapped water resource.

In 2015, a University of the Philippines Baguio study pointed out that fewer Baguio households would deal with reduced water supply “if the practice of rainwater harvesting was to be adopted by all or most households in the city and if this was done on a larger scale than just the use of drums, pails and basins.”

Because Baguio’s population is still growing, “water deficits are likely to worsen and will put tremendous pressure on the economic viability and environmental integrity of the city and its neighboring territories like La Trinidad,” Ablang said.

A carrying capacity study done before the pandemic struck had estimated Baguio’s daytime population at 700,000. The number included students, workers from other towns and provinces, and tourists.

The study team would need to seek out the best underground water zone in Baguio where “rainwater can be injected back to our aquifers,” said Salvador Royeca, general manager of the Baguio Water District.

“The aquifer or underground water tables could be 60 meters to 200 m deep depending on the geology … The project aims to improve the recharging rate of our aquifers as much of Baguio’s ground has been [paved with concrete] and rendered impermeable,” he said.

This system has been used in other countries and was tested in Cebu, Royeca added.

The water utility has been developing new water sources because demand had exceeded supply since the early 1990s. It now generates 47,000 cubic meters of water daily for a demand of 50,000 cu. m. INQ

Read Next
Only court can stop Cebu’s health protocol, says exec
EDITORS' PICK
SANTIS Delicatessen: The road to survival is sweet and savory
Gilas out to prove Korea win not a fluke; Tab fires back at ‘lucky shot’ remark
LOOK: ‘Low vaccination’ turnout in 4 Manila sites after no walk-in policy
Eleazar: PNP open to ICC probe but PH judicial process is working
Internet: Overcoming pandemic lockdowns
Piolo Pascual: The Ultimate Heartthrob continues to level up
MOST READ
Lacson or Pacquiao a possible presidential candidate for NPC – Sotto
Palace: Face shields no longer needed to be worn outdoors
Duterte to issue memo on face shields this week
DFA opening 10 satellite offices to boost passport services
Don't miss out on the latest news and information.