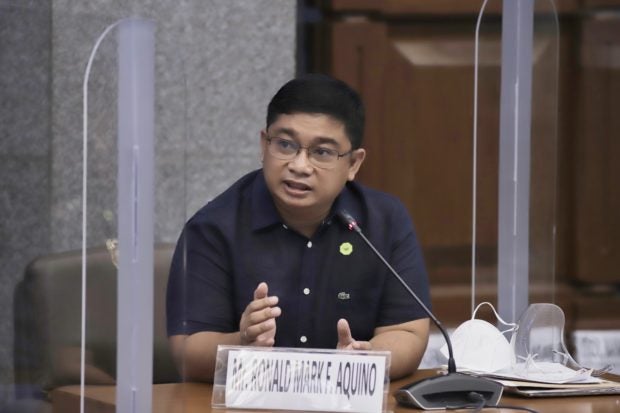 Ronald Mark Aquino, son of Calbayog City Mayor Ronaldo Aquino, says he was in a resort celebrating his birthday with his family when he learned of his father’s ambush on March 8, 2021. The younger Aquino attended the hybrid Senate inquiry on the killing of his father Wednesday, June 9, 2021 (Joseph Vidal/Senate PRIB)

MANILA, Philippines — The ongoing Senate inquiry into the March killing of Calbayog City Mayor Ronaldo Aquino took an unlikely twist on Wednesday when a witness implicated a rival politician and in the process exposed an apparent police practice of fabricating cases against drug suspects, often leading to their deaths.

Testifying at a hearing of the Senate committee on public order and dangerous drugs, at which two former chiefs of the Philippine National Police were present, Police Master Sgt. Jose Jay Senario narrated how he, in alleged collusion with a supposed disgruntled politician and some police officers, concocted stories on Aquino’s involvement in the trade in illegal drugs.

Senario was presented as a “confidential witness” of Aquino’s family at the hearing presided over by Sen. Ronald “Bato” dela Rosa, the committee chair and a former PNP chief.

The committee is investigating the alleged shootout on the afternoon of March 9 in Calbayog between Aquino’s aides and a team of policemen belonging to the Integrity Monitoring and Enforcement Group and the Samar Provincial Drug Enforcement Unit (PDEU).

Aquino and five others—his bodyguard, Police Staff Sgt. Rodelio Sario, and his driver, along with two PDEU operatives identified as Police Capt. Joselito Tabada and Police Staff Sgt. Romeo Laoyon, and a civilian hit by a stray bullet—were killed in the alleged gunfight.

Initial police reports earlier described the incident as an ambush, but this scenario was later changed to a “shootout” in a legitimate police operation.

The inquiry was launched on the basis of Senate Resolution No. 725 filed by Sen. Panfilo Lacson, the committee vice chair and himself a former PNP chief.

Senario, an intelligence operative, said that sometime in 2018, he was “utilized” by Tabada on at least two occasions to invent sworn statements on Aquino’s alleged involvement in illegal drugs.

The statements were supposed to be used to secure a search warrant to be used against the mayor.

“He directed me to make up some documents and act as the deponent for the application of a search warrant against Mayor Aquino, and prepare a sketch plan for the surveillance on his residence,” Senario said.

The witness also claimed to have helped set up the murder of the leader of Aquino’s men, identified as Bembol Gargar, but said it was the latter’s companion who was killed by mistake.

He said Aquino’s political rival, former councilor Raymondo Uy, handed him P50,000 as “reward” for his work on Gargar. He did not directly link Uy to Aquino’s killing.

Senario also said he had previously been contracted by Tabada to find an “asset” who would issue false statements that Aquino was the protector of a police escort on the PNP drug watch list.

“But after I have already presented the affidavits, PD told me the plan to apply for a search warrant has been shelved,” Senario said, referring to Police Col. Nicholas Torre III, then the police provincial director of Samar.

It turned out that two options had been planned: to apply for a search warrant to be used against Aquino, or to ambush him, Senario said.

As Senario continued talking about his work as a police operative, Lacson interrupted him to say that he should be assisted by legal counsel in his testimony.

After some hesitation, Senario then told Dela Rosa: “Sir, I will no longer continue with my testimony.”

The Senate inquiry comes at a time when the PNP and the Department of Justice are cooperating on a review of a number of extrajudicial killings in the Duterte administration’s war on drugs.

Senario’s claims are contained in a sworn statement, which served as one of the bases for the National Bureau of Investigation to conclude that the killing of Aquino was politically motivated.

“[Investigation showed] that Mayor Aquino had been subjected to monitoring as early as October 2020. The vehicles he and his associates used were under the microscope of the assailants and showed the latter’s determination and plan to eliminate Mayor Aquino,” the bureau said in its report, as presented by NBI Region 8 Director Jerry Abiera.

Also testifying at the hearing, Ronald Mark Aquino, the mayor’s son, turned emotional when he recounted how the PNP had charged him with murder and grave threats when he and other family members were merely expressing distress at his father’s killing.

“What should have been a happy day for me would turn out to be the most tragic, with the killing of my father. What [made] it even more painful [was] how my family has been distressed, yet [the PNP] filed charges against me,” he said.

Mayor Aquino was on his way to the birthday celebration of his son when he was waylaid at a bridge in Barangay Lonoy.

He took a number of bullets, including in the head, and expired upon reaching a hospital.

The younger Aquino backed the NBI finding that the murder of his father was linked to politics.

“This is not an ordinary killing … This was ordered by someone, and most likely, this is connected to politics,” the son said.