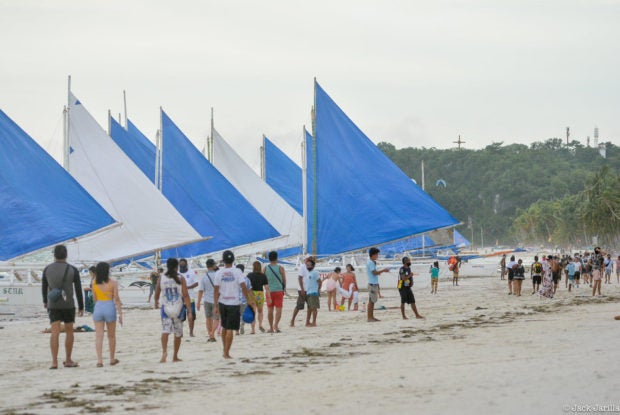 TOURISTS WELCOME Boracay Island welcomes more tourists from Metro Manila and other provinces as the government gradually eases travel restrictions. But Malay town, where the resort island belongs, is among the areas in Aklan province that have been classified under high risk due to a spike in COVID-19 cases. —JACK JARILLA

ILOILO CITY, Iloilo, Philippines — Stricter protocols have been implemented in several cities and towns in Western Visayas region due to the rising number of COVID-19 cases in these areas.

In Aklan province, six of 17 towns were considered high risk as total cases in the province reached 2,709 on June 7, with 467 classified as active. The towns where infections have spiked are the provincial capital of Kalibo and Altavas, Balete, Ibajay, Malay and Lezo.

Kalibo has the highest number of infections with 793, followed by Malay, 432; and Banga, 228. Kalibo and Malay are the most populous towns in the province.

Seven new cases were reported on Boracay, which is part of Malay, on Monday, bringing the total number of COVID-19 cases in three villages on the resort island to 367. These include 62 active cases, two deaths and 303 recoveries.

Iloilo City and Capiz province have also been classified as high-risk areas in terms of use of hospital beds and mechanical ventilators for COVID-19 patients.

Iloilo City Mayor Jerry Treñas earlier raised concern over the shortage of hospital beds dedicated to COVID-19 patients and of nurses serving in the city.

Police and military nurses have been sent to some hospitals to augment their personnel. The city government was also hiring more nurses, nursing aides, and utility personnel. He said hospitals have been sending patients to hotels due to a lack of beds.

“We cannot disregard the fact that cases are going up and our health facilities are overwhelmed,” Treñas said.

Iloilo province also implemented border controls from June 4 to June 18 and only travel for work, emergency, and essential purposes had been allowed.

On Monday, Guimaras imposed border restrictions as the number of infections in the province reached 605, including 101 active cases, on June 5.

Only essential establishments would be allowed to operate, according to an executive order issued by Gov. Samuel Gumarin.

Dr. Bea Camille Fillaro-Natalaray, a spokesperson for the Department of Health in Western Visayas, said the daily case average in the region this month hit 613, higher than records in previous months.

Aside from Iloilo City, she said Bacolod City, the provincial capital of Negros Occidental, had been classified as high risk.

Bacolod City and Negros Occidental province each recorded 10 COVID-related deaths in a week, from June 1 to June 7.

Bacolod Mayor Evelio Leonardia, national president of the League of Cities of the Philippines, earlier appealed for the inclusion of more areas as priority recipients of vaccines given the surge in cases outside Metro Manila, its surrounding provinces, Metro Cebu and Metro Davao.