Duterte to drug dealers: I can go down to hell to meet you | Inquirer News

Duterte to drug dealers: I can go down to hell to meet you 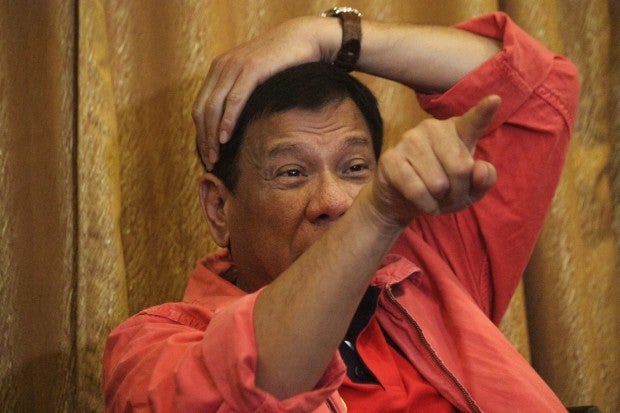 MANILA, Philippines — If drug dealers can do evil things, President Rodrigo Duterte says he, too, can do so and even go “down to hell” to meet them.

(You drug people, those who are in the business of srugs, you’re doing an evil thing and you think that you can conquer good. If that’s the paradigm in your mind, your mindset, you are doing evil and if possible, I also do evil. We’ll be evil to evil.)

“Do not ever, ever think that you are the only one who can do evil things. Kasi ako, marunong din akong bumaba ng impyerno to meet you. Kung anong kaya mong gawin, kaya ko rin talaga. Gagawin ko,” he went on.

(Do not ever, ever think you are the only one who can do evil things. Because I can go down to hell to meet you. What you can do, I can also do. And I will do it.)

The President, whose war against drugs has been heavily criticized, said “nothing will happen” if one fights evil with good.

“You destroy my country, I will have to tell you that you bring out the worst in me, the violent side of my persona,” Duterte said, addressing drug dealers. “Do not ever, ever think that you monopolize evil on this planet.”

Even as he warned drug dealers, the President also claimed that drug use has decreased in the country.

“We have seen a lessening of the drugs in the Philippines. Sa Davao wala na, tingi-tingi, but sa ibang lugar, meron sa Manila but they are almost paralyzed because we have better intelligence now and it’s working,” Duterte said.

(We have seen a lessening of the drugs in the Philippines. In Davao, there’s a little bit, in Manila there’s still drugs, but they are almost paralyzed because we have better intelligence now and it’s working.)

Ending the drug trade was among the campaign promises of Duterte when he ran in 2016. The President admittedly said he did not know he would be fighting the government itself to address this issue.