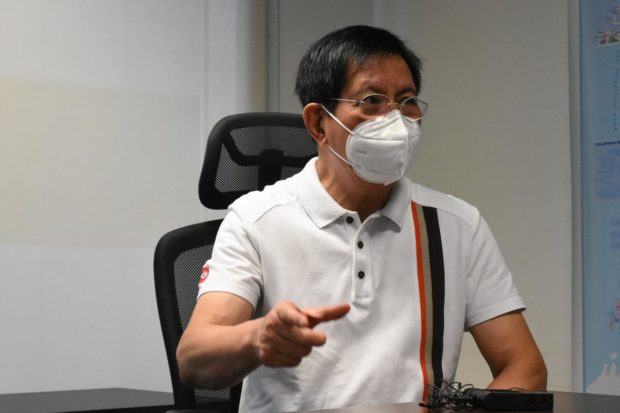 Senator Panfilo Lacson during an interview with INQUIRER.net on May 10, 2021. INQUIRER.net file photo / Noy Morcoso

MANILA, Philippines — A ranking government official has allegedly started organizing at least two troll farms every province to discredit critics of the administration and possible opponents in the 2022 elections.

Senator Panfilo Lacson made this revelation on Tuesday, citing information from a former member of his staff, who was allegedly approached by the official.

Lacson did not name the official except saying he is an undersecretary.

(We’ve been receiving a lot of information regarding trolls operating to discredit possible opponents—not just limited to us— but also those who are not aligned with the administration.)

(This early, I know of a high official, let’s say an undersecretary organizing nationwide, requiring a quota for each province to put up at least two troll farms.)

Lacson said he only learned about this when a former staff member declined the offer and reported it to him.

“So you can just imagine if it materializes and using the resources of the government whether or not it is sanctioned by Malacanang—well I hope not and I don’t believe so— maybe overeager lang yung official na yun na magpakitang gilas sa kanyang ginagawa,” he said.

He then underscored the need to elevate the political discourse, and get rid of money or entertainment politics.

(We should now learn since we are the ones who suffer in the end . It has become a vicious cycle.)

Lacson is among those being floated to run for president next year but has yet to make a decision.