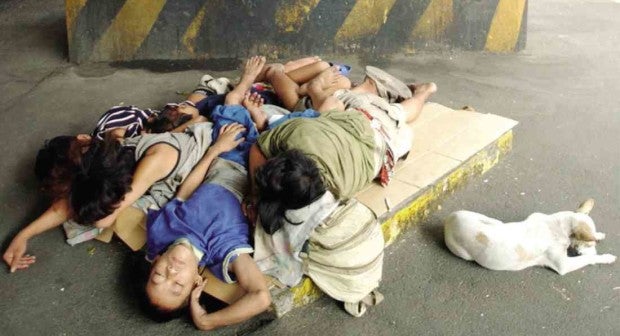 ROADSIDE LULLABY In this undated file photo, a group of homeless children and their pet dog have found themselves a “bedroom” under an Edsa flyover. Inquirer file photo

MANILA, Philippines — The Metropolitan Manila Development Authority (MMDA) on Tuesday ordered the clearing of all types of clutter and obstructions, including illegally-parked and abandoned vehicles, under flyovers in EDSA.

“Hindi puwedeng gamiting impounding ito. This is a national highway, kalye ito. Maski sino, bawal gumamit nito (you can’t put impounded stuff here. This is a highway, no one is allowed to use this). We will coordinate with the proper authorities on this matter,” Abalos told reporters in a statement..

MMDA will also prohibit parking in these areas, adding that it will place “no parking” and tow away signages within the vicinity.

“I will make sure that violators will be sanctioned and issued violation tickets for illegal parking,” Abalos said.

“The equipment that the MMDA is utilizing for emergency purposes will be retained, but not this much,” Abalos said.

“Further, we will identify strategic locations to relocate the remaining equipment. MMDA should set an example here,” he added.

According to Abalos, discarded damaged orange barriers will be disposed of as garbage, while broken concrete barriers will be smashed and will be used as filling materials at the MMDA Tumana Impounding Area in Marikina.

Abalos also clarified that these directives are applicable on all areas within the jurisdiction of MMDA and not on EDSA alone.