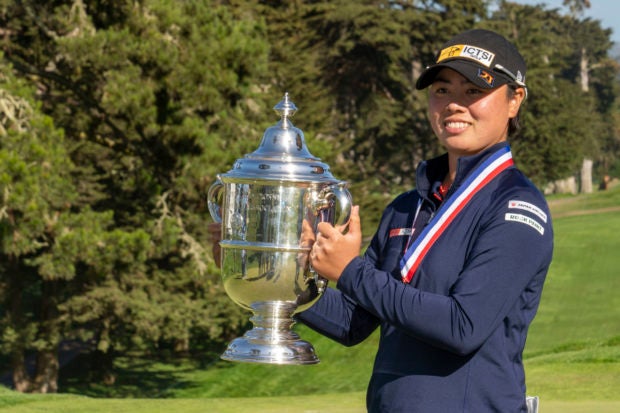 Yuka Saso hoists the US Open trophy after winning in a sudden death playoff over Nasa Hataoka following the final round of the U.S. Women’s Open golf tournament at The Olympic Club. Mandatory Credit: Kyle Terada-USA TODAY Sports

In filing Senate Resolution No. 748, Sotto said that Saso’s achievement “should serve as a fitting reminder to all Filipinos that amid our struggles, there is always something good to look forward to.”

“Congratulations for bringing an unexpected victory for our people! Our hearts beam with pride and joy with this milestone in Philippine sports. We are extremely proud of your achievement,” Sotto said in a statement.

“The sight of you with that birdie on the third playoff hole, which gave you the 2021 US Women’s Open title, was the perfect weekday opening that brought a much-needed breather to the Filipino people from the barrage of gloomy updates on the continued threat of the coronavirus disease… Thank you, Yuka Saso for being the Filipino people’s silver lining during this challenging time,” he added.

In the resolution, Sotto likewise underscored that Saso “made history as the first Filipino to win the prestigious tournament and (to) engrave her name on the Harton S. Semple Trophy.”

“In a sport which is mainly participated and won by Americans and Europeans, Yuka Saso’s win in the US Women’s Open Golf Championships has put the name of the Philippines on the map, and has absolutely given joy, pride, honor, and inspiration to the country and the Filipino people,” Sotto further said.

A similar resolution has been filed in the House of Representatives by Senior Citizens Partylist Rep Rodolfo Ordanes.

“Saso’s historic win will finally put the Philippines on the world’s golfing map and will inspire more Filipinos to pursue golf, both as a sport and as a hobby,” Ordanes said in the resolution.

Born to a Filipino mother and a Japanese father, Saso got acquainted with golf at a young age as she relocated to Japan after staying in Bulacan in her early years.

From there, Saso started competing in amateur contests, the highlight of which was her representing the country in the 2018 Asian Games in Indonesia, where she got two gold medals.

She then turned pro in 2019 and in 2020 won her first tournament in the Japan Ladies Professional Golf Association.