It’s better for Duterte to be an ‘elder statesman’ than run for VP, says Cayetano | Inquirer News
Close
menu
search

It’s better for Duterte to be an ‘elder statesman’ than run for VP, says Cayetano 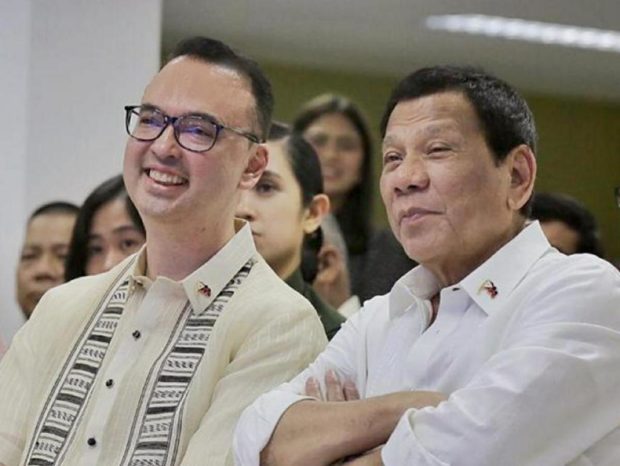 MANILA, Philippines — It would be better for President Rodrigo Duterte to “just be the elder statesman” than run for vice president in the 2022 elections, Taguig-Pateros Rep. Alan Peter Cayetano told reporters on Monday.

Cayetano, who was Duterte’s running mate in the 2016 national elections, said that the president’s “legacy” might be affected if he would decide to run for the secon- highest government post in next year’s elections.

“If I were asked personally, for example, if I were beside him right now and he would ask: Alan, what do you think? I will tell him: ‘Boss, you became one of the best presidents. Your legacy might be hit, and there are many other issues. You know, whoever becomes the next president, even if its [Vice President Leni Robedo,” she will consult with you. So just be the elder statesman,’” Cayetano said, speaking partly in Filipino.

“Look at President Ramos. Not everyone agrees with him. To be frank, he wasn’t the most exciting politician. But then he became an elder statesman,” the former House speaker added.

Cayetano stressed, however, that it would still be a decision for Duterte to make.

“It’s he who has to decide, not me. But that’s my view. It’s also affected. And what if the one he endorses as president will not win? So they will quarrel. This time around he will have no power for six years. He will just be waiting. If anything happens to the president, he might be blamed for it,” Cayetano said.

Duterte’s name floated as a possible vice presidential candidate after the ruling Partido Demokratiko Pilipino–Lakas ng Bayan (PDP-Laban) adopted a resolution seeking to convince him to run for the post in the 2022 polls.

Cayetano, for his part, earlier bared that he was “seriously considering” running for the presidential or other posts.