Palawan turtles bred under human care back in the wild 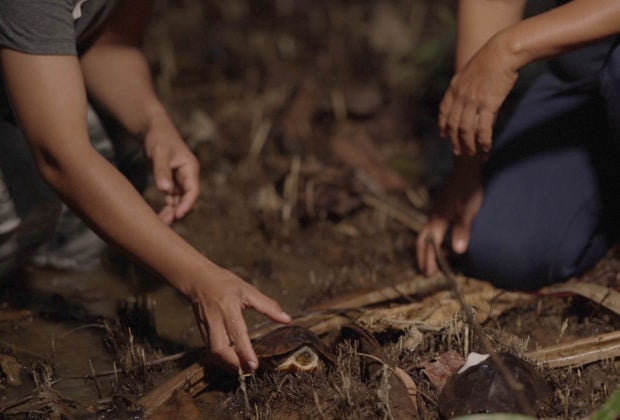 NATURAL HABITAT Critically endangered turtles Sonja and Euds, hatched and bred by Katala Foundation Inc. in Puerto Princesa City, are released into their natural habitat in the Palawan forest in the hopes that they will eventually help augment dwindling wild populations elsewhere. —PHOTO COURTESY OF KATALA FOUNDATION AND MANDAI NATURE

MANILA, Philippines — Two critically endangered Palawan forest turtles that were hatched and bred under human care have been released in the wild in the province, marking a milestone for the survival of this species thought to have long been extinct.

The historic act in efforts to save the creatures was made public this month following the results of the initial monitoring of conservation groups overseeing them.

It was the culmination of more than seven years of work by the Katala Foundation Inc. (KFI), a conservation group based in Palawan’s capital of Puerto Princesa City, with the support of the Singapore-based Mandai Nature, which is dedicated to the protection of threatened species in Singapore and Southeast Asia.

The forest turtles (Siebenrockiella leytensis), named Sonja and Euds, were the first two recorded hatchlings of the endemic species under human supervision in 2018. Their parents had been cared for in the KFI’s assurance colony facilities in Palawan, an island rich in biodiversity and known as the country’s last ecological frontier.

At present, the Palawan forest turtle is listed as one of the top 25 endangered turtles in the world, and among the most illegally traded in the Philippines. Being a lowland species dependent on streams and wetlands, their wild populations are also threatened by habitat loss and land conversion.

Sonja and Euds were almost 3 years old at the time of release, “having reached a size large enough to protect them from most natural predators,” Sabine Schoppe, KFI founding director and director of the Philippine Freshwater Turtle Conservation Program, said in an interview on Sunday.

The two weighed between 370 grams and 590 grams, with body lengths of 13 centimers to 16 cm. Palawan forest turtles are known to grow to more than 30 cm.

Since the arrival of Sonja and Euds in 2018, Schoppe and her team have successfully hatched 15 more turtles under their care.

Sonja and Euds were released in a protected site found to have encompassed the right environmental conditions. KFI research showed that turtles settle in a relatively small area as long as the habitat meets their needs to survive.

Small radio transmitters were attached to each reptile to monitor and track their movements in their first three months in the wild.

Preliminary analysis of telemetry data showed that their movements were concentrated near the release site in an area covering 1,000 square meters.

“The fact that the turtles stay close to the release site validates our earlier studies that indicate released individuals would settle within their release site provided it comprises their favorite habitat,” Schoppe said. “If such an area is actively protected, the chances of these individuals helping to augment the dwindling wild populations elsewhere are higher.”

At the moment, the foundation and its partners are conducting long-term surveys to assess the remaining wild populations. The species is endemic in the Philippines and restricted to northern Palawan, particularly in five municipalities.

Also known as the Philippine forest turtle or the Philippine pond turtle, the Palawan forest turtle was long thought to be gone forever. First described in the wild in 1920, there was a chance discovery of a single specimen in a local market in Palawan in the late 1980s.

Finally, after an 80-year absence, wild populations were rediscovered on the island in 2004.

Its rare status has led to overexploitation, with poachers actively searching for them for illegal wildlife trade, both for pet markets and food. In June 2015, nearly 4,000 poached Palawan forest turtles bound for pet stores in China, Hong Kong and Japan were confiscated from a smuggling ring in the province.

Schoppe said the main goal of the conservation plan for the Palawan forest turtle was its survival in its natural habitat.

“But we engaged [in] conservation breeding as there are many confiscated turtles and [because] poaching continues. By maintaining an assurance colony of the species, we can augment natural populations that suffered losses and we could eventually reintroduce the species to an area from which they have vanished,” she said.

Breeding these turtles in human care is notoriously difficult since the species is highly affected by stress that can cause infertility and diseases, Schoppe said. “It would only reproduce in an environment that imitates that natural environment,” she said.

The KFI and its partners are hopeful that the release of Sonja and Euds would improve the chances of the survival of its kind, hopefully back in the wild.

“Like any other species, [it] is part of an ecosystem. It plays a role to balance nature,” Schoppe said. The turtles can disperse seeds and help maintain riverine vegetation, and reduce mosquitoes and golden “kuhol” (snail), a pest in rice fields.

Mandai Nature’s Luz said this accomplishment was an example of an achievement through strong global collaboration and conservation leadership.

“We hope this is the first of many turtle releases and we stay committed to help ensure these turtles thrive in the wild again,” she said. INQ