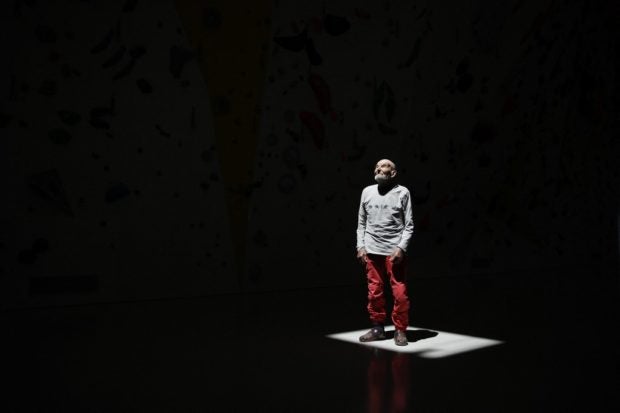 Swiss 98-years-old veteran Alpinists Marcel Remy poses for a pictureat the indoor climbing centre in Villeneuve on the eastern shores of Lake Geneva, on May 31, 2021. – Climbing has always been major part of Remy’s life. Brought up on tales of the mountains, he never stopped going off to discover the great outdoors and the Alps became his playground. Though he mostly climbs indoors these days, Remy still does sorties into the mountains. In 2017, at the age of 94, he conquered the Miroir de l’Argentine, a Swiss climbing classic with its 500 metres of limestone wall. And he shows no sign of stopping. (Photo by STEFAN WERMUTH / AFP)

VILLENUEVE, Switzerland — Marcel Remy is the grand old man of Swiss Alpinists, and with his sure and steady progress as he conquers a climbing wall, few would realize he is 98 years old.

Every Monday morning, Remy drives his old Toyota to the indoor climbing center in Villeneuve on the eastern shores of Lake Geneva, where he meets his son Claude to plot a path to the top of a 16-meter-high wall.

“It gives me a lot of pleasure because you have to work, think and surpass yourself; that’s what suits me well,” Remy told Agence France-Presse (AFP) between his two morning climbs.

“I do it for my health—that’s the first thing. I carry on for my muscles because I’ve noticed quite often that if I stop for two or three weeks, it’s much harder to start again. It’s better to keep coming often.”

Remy said the secret to his continued success was pacing himself.

“It’s the rhythm that you have to take—for breathing, for the movements,” he explained. “If I go beyond that, there’s a price to pay afterward. I can’t tell you exactly what, but either the shoulders or the muscles. It’s better to go calmly, without overexertion—and then it works.”

Climbing has always been a major part of Remy’s life. Brought up on tales of the mountains, he never stopped going off to discover the great outdoors and the Alps became his playground.

Remy worked on the Swiss railways and spent all his free time in the mountains, taking his two sons with him.

“He was a tough dad. With him it was do or die, whatever the conditions,” said his oldest son Claude, 68.

But despite Remy’s ruggedness, he knew how to pass on his passion for the Alps. Claude and his 65-year-old brother Yves have also become well-known in the climbing world.

Nowadays, the roles are reversed and it’s Claude guiding his father as he makes his second ascent of the morning at the Villeneuve climbing hall, one of the biggest in Switzerland.

Claude explained: “He’s a tough character. He’s very resistant to hardship. Even if it’s a very difficult section on the wall, as we saw toward the end, he searches and finally works out how to resolve it because he’s motivated.”

Claude said most people were stunned when they find out how old his father was, but the respect flowed in both directions.

“He inspires great admiration in all age groups, even among the very young,” but even so, “he’ll look at how young people climb and try to copy their movements.”

Though he mostly climbs indoors these days, Remy still does sorties into the mountains.

In 2017, at the age of 94, he conquered the Miroir de l’Argentine, a Swiss climbing classic with its 500 meters of limestone wall.

“If I’m still enjoying it and feeling good, why not carry on?” he said.