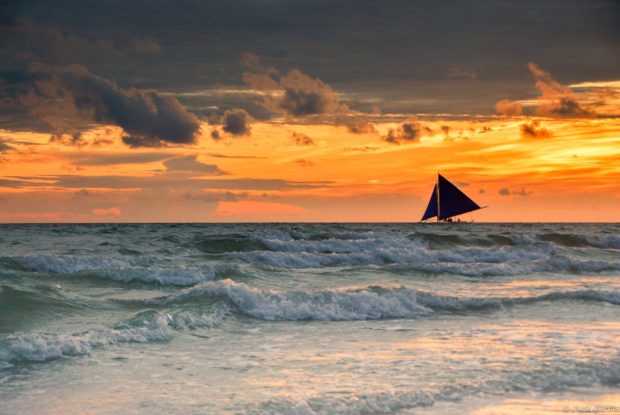 SUNSET HUES Tourists can again enjoy watching Boracay’s famed sunset, like in this photo taken on Saturday, after several businesses on the island have reopened, with over 2,000 tourists arriving from Metro Manila since June 1 after travel restrictions were lifted, giving hope to residents and business owners that they can soon recover from a prolonged economic slump. —JACK JARILLA

ILOILO CITY—More than 2,000 tourists from Metro Manila visited Boracay Island in just three days following the lifting of restrictions on leisure travel for residents of the National Capital Region (NCR) and its neighboring provinces.

Tourist arrivals on June 3 exceeded those on June 1 and 2, reaching 385 tourists. Flights from Manila to Barangay Caticlan in Malay town brought back the jump-off point to the island.

Tourist arrivals totaled 805 on June 4 and 959 on June 5. The Malay tourism office reported that 1,382 (64%) of 2,149 tourists had come from Metro Manila within three days of the restrictions being loosened.

The Inter-Agency Task Force on the Management of Emerging Infectious Diseases last week lifted travel restrictions between NCR and the provinces of Bulacan, Cavite, Laguna and Rizal to areas like Boracay Island that are under modified general community quarantine, from June 1 to June 15.

Those allowed to travel were still subject to travel and health protocols, including a mandatory preboarding COVID-19 test through a swab or saliva specimens for Boracay Island-bound tourists.

Councilor Nenette Aguirre-Graf of Malay town, which has jurisdiction over Boracay, said the 959 tourists who arrived on Saturday booked in 83 resorts on the island.

She said the local government was preparing for more tourists.

After the lockdown in March last year, Boracay Island first reopened to tourists from Western Visayas on June 16, 2020. It subsequently accepted visitors from other areas in October last year.

Tourist arrivals reached more than 10,000 per month starting in December last year but again slumped in March this year due to the lockdown implemented in Metro Manila and its neighboring provinces.

Julia Lervik, who co-owns a cafe and resort villas for rent, said lifting restrictions was most welcome coming from the “worst ever” lockdown with no one earning on the island due to the lack of tourists.

She said they were hoping that COVID-19 vaccination on the island would speed up “so that we can open up the island and the economy again.” INQ