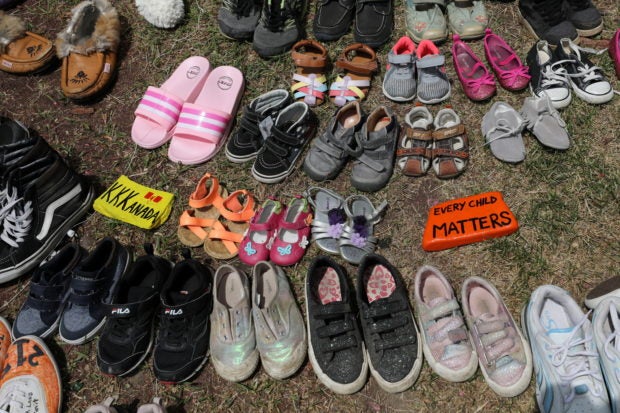 Children’s shoes line the base of the defaced Ryerson University statue of Egerton Ryerson, considered an architect of Canada’s residential indigenous school system, following the discovery of the remains of 215 children on the site of British Columbia’s former Kamloops Indian Residential School, in Toronto, Ontario, Canada June 2, 2021. (REUTERS)

OTTAWA  – The Catholic Church must take responsibility for its role in running many of Canada’s residential schools for indigenous children, Prime Minister Justin Trudeau said on Friday, after the discovery of the remains of 215 children at one former school last month.

“As a Catholic, I am deeply disappointed by the position the Catholic Church has taken now and over the past many years,” Trudeau told reporters. “We expect the Church to step up and take responsibility for its role in this.”

The Canadian Conference of Catholic Bishops did not respond to a request for comment.

Between 1831 and 1996, Canada’s residential school system forcibly separated about 150,000 children from their homes. Many were subjected to abuse, rape and malnutrition in what the Truth and Reconciliation Commission in 2015 called “cultural genocide”.

Run by the government and church groups – the majority of them Catholic – the schools’ stated aim was to assimilate indigenous children.

The discovery this week of the remains of the children at the Kamloops Indian Residential School in British Columbia, which closed in 1978, has reopened old wounds and is fueling outrage about a persistent lack of information and accountability.

From 1893 to 1969, a Catholic congregation called the Missionary Oblates of Mary Immaculate ran the Kamloops school, which was once Canada’s largest.

On Friday, Tk̓emlúps te Secwépemc Chief Rosanne Casimir, on whose land the Kamloops school still stands, told reporters the nation has not received any records from the Oblates of Mary Immaculate that would help identify the children.

“We do want an apology” from the Catholic Church, Casimir said. “A public apology. Not just for us, but for the world.”

In 2008, the Canadian government formally apologized for the system. Trudeau said many are “wondering why the Catholic Church in Canada is silent, is not stepping up.”

He added: “Before we have to start taking the Catholic Church to court, I am very hopeful that religious leaders will understand this is something they need to participate in and not hide from.”

Trudeau has not directed such pointed comments at the Catholic Church over the residential schools since taking office in 2015.

On Wednesday, Vancouver Archbishop J. Michael Miller said on Twitter “the Church was unquestionably wrong” and his archdiocese would be transparent with its archives and records regarding residential schools.

The Conference said on its website that each diocese is separate and responsible for its own actions.

“The Catholic Church as a whole in Canada was not associated with the residential schools, nor was the Canadian Conference of Catholic Bishops,” it said.

Separately, United Nations human rights experts on Friday called on both Canada and the Vatican to further investigate the deaths of the children found in Kamloops.

“It is inconceivable that Canada and the Holy See would leave such heinous crimes unaccounted for and without full redress,” they said in a statement.