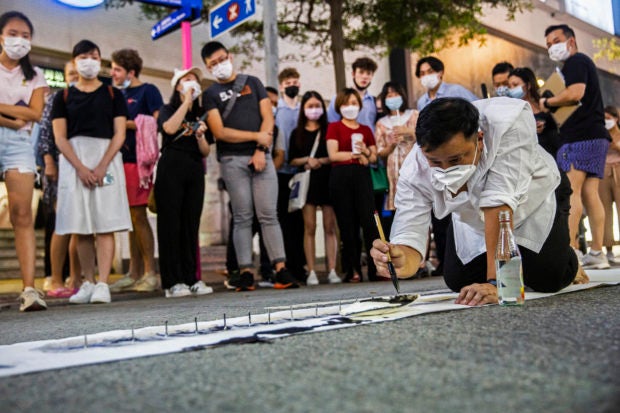 An artist takes part in a performance art in the Causeway Bay district of Hong Kong on June 3, 2021, to mourn the victims of China’s deadly Tiananmen Square crackdown after authorities banned an annual vigil and vowed to stamp out any protests come the anniversary on June 4. (Photo by ISAAC LAWRENCE / AFP)

About 7,000 officers have been placed on standby to stamp out any attempt to hold a mass candlelight vigil that Hong Kongers have attended in their thousands each anniversary for the past three decades.

The first arrest came early Friday morning when lawyer Chow Hang-tung, one of the few remaining prominent democracy activists not already in jail or in exile, was detained by four police officers outside her work.

Chow, 37, is one of the vice-chairs of the Hong Kong Alliance which organizes the annual vigil. A police source told AFP she had been detained on suspicion of publicizing an unlawful assembly.

Hundreds were killed in the crackdown, by some estimates more than 1,000.

Public commemorations of the event are forbidden on the mainland.

Under a “One country, two systems” policy that was meant to give Hong Kong more freedoms, the city was the only place on Chinese soil where large-scale commemorations were tolerated and the huge crowds massed each year in Victoria Park.

But, following months of huge and often violent democracy protests in 2019, China has carried out a sweeping campaign to silence dissent and enforce “patriotism”.

Authorities banned this year’s gathering citing the coronavirus pandemic — although Hong Kong has not recorded an untraceable local transmission in more than a month.

While last year’s vigil was also denied permission because of the pandemic, thousands defied the ban.

Authorities have also warned in recent days the subversion clause of a powerful new national law imposed on Hong Kong could be used against those marking the Tiananmen anniversary.

Beijing imposed the law just a few weeks after last year’s Tiananmen rally and it has transformed the city’s once freewheeling political landscape.

More than 100 pro-democracy figures have been arrested under the security law, mostly for political views and speech. Most are denied bail and face up to life in prison if convicted.

However, China has been unable to quash all dissent, and Hong Kongers were planning creative ways to mark Friday’s anniversary.

“A regime can ban an assembly but it can never ban the indelible grievances in people’s hearts,” Lee Cheuk-yan, a now-jailed democracy activist and the current head of the Hong Kong Alliance, wrote in a message posted on his Facebook page on Thursday. 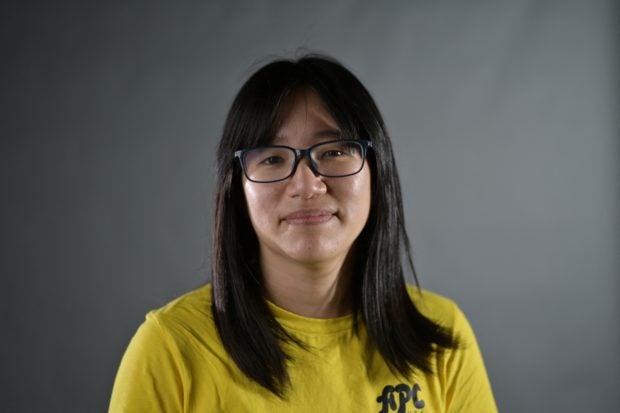 (FILES) In this file photo taken on March 21, 2021, Chow Hang-tung, barrister and a leader of the Hong Kong Alliance in Support of Patriotic Democratic Movements of China, poses during a photo session in Hong Kong. – Hong Kong police detained prominent democracy activist Chow Hang-tung on June 4, 2021, with authorities determined to prevent any protests on the anniversary of Beijing’s deadly Tiananmen crackdown. (Photo by Peter PARKS / AFP)

Activists have called on residents to light candles in their own homes or neighborhoods come Friday evening, or post commemoration messages on social media.

“Turn on the lights wherever you are — be it torchlight on your phone, real candles, or electronic candles,” Chow wrote on a Facebook page just hours before her arrest.

Clara Cheung was among a small group of artists who gathered near Victoria Park on Thursday evening.

She brought 64 white flowers — representing June 4 — and laid them on the street.

“We need to find a new way to express ourselves,” she told AFP.

Pro-Beijing politicians have suggested that calls to “End one-party rule” and “Bring democracy to China” — both common chants at Tiananmen vigils — could now be deemed subversion, one of the crimes in the broadly-worded national security law.

The security legislation has also been combined with a new campaign dubbed “Patriots rule Hong Kong” aimed at purging anyone perceived to be disloyal from public office.

In mainland China, the Tiananmen anniversary is usually marked with an increase in online censorship and the square in Beijing being cordoned off.

There was tight security at the square on Friday, with police controlling IDs of people at each point of access, according to an AFP journalist in Beijing.

China often faces international criticism for its campaign to stifle remembrance of the crackdown.

On Friday, United States Secretary of State Antony Blinken called “a full accounting of all those killed, detained, or missing.”

Taiwan’s foreign ministry said “the students of Tiananmen and Hong Kong must not be erased nor forgotten.”