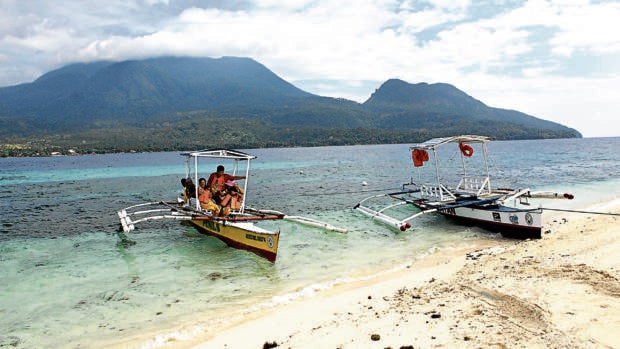 TOURIST HAVEN In this photo taken before the pandemic, a boat carrying tourists docks onWhite Island in Camiguin province. The sandbar, surrounded by clear waters, and with Mt. Hibok-Hibok and Mt. Vulcan as perfect backdrop, is among the top tourist attractions in Northern Mindanao. —ERWIN M. MASCARIÑAS

Camiguin, the leading summer destination in the region, has called off a planned reopening for tourists, concerned that their influx could expose the local population to greater risks of infection.

“We are actually preparing for the reopening of our tourism but with what’s happening in our region, we are just waiting for the situation to get better,” said Mayor Yñigo Jesus Romualdo of Mambajao, Camiguin’s capital town.

Toward the end of May, Camiguin had only less than 20 active cases, but the region’s infection numbers have grown to alarming levels.

As of June 2, Northern Mindanao’s five provinces and two highly urbanized cities posted a total of 5,202 active cases. From May 26 to June 1, the region recorded 2,896 new infections. Its highest single day count was 603 cases on May 26.Cagayan de Oro City, the regional capital, accounted for at least a third of the regional surge, according to Northern Mindanao health director, Jose Llacuna.

Due to this trend, the regional Inter-Agency Task Force on COVID-19 earlier recommended to the national government to place the entire region under a general community quarantine status. This was followed by a similar request by the local government of Cagayan de Oro.

The national task force refused to elevate the region’s quarantine level but placed Cagayan de Oro City under modified enhanced community quarantine, which means that most businesses will only operate at half their capacity.

In Bukidnon province, another major tourist drawer in the region, Gov. Jose Maria Zubiri Jr. has required leisure travelers to present a negative result of a reverse transcription-polymerase chain reaction test taken 72 hours prior to their entry.

This is expected to reduce the number of inbound travelers and dampen tourism revenues.

Zubiri has also tasked city and town mayors to order the closure of tourist destinations in their respective areas and impose curfews and liquor bans to curb virus transmission. —WITH A REPORT FROM RYAN D. ROSAURO