LUCENA CITY – Two male suspects were killed in an alleged shootout with policemen along the Southern Luzon Expressway (SLEX) in Calamba City, Laguna on Thursday afternoon.

A report from the public information office of the Police Regional Office in Calabarzon (Cavite, Laguna, Batangas, Rizal and Quezon) said the still unidentified suspects were killed after they engaged the operatives from the Regional Intelligence Division – Anti-Carnapping (RID-Ancar) in a gun battle at the Silangan exit of the South Luzon Expressway (SLEX) at around 2:10 p.m.

The report described the suspects as “notorious robbery/kidnapping personalities.”

Police said RID-Ancar personnel were earlier alerted that a Chinese national was kidnapped by a “notorious robbery/kidnapping group” at Asiana in Paranaque City using a white Toyota Hi-Ace van.

The RID-Ancar agents immediately conducted a patrol in the southern part of the National Capital Region until they spotted the target vehicle heading to the expressway. 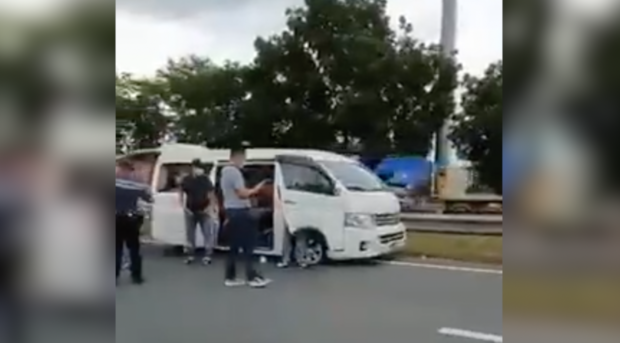 The white Toyota Hi-Ace van allegedly used by the kidnap gang. Screengrab from a contributed video

At the SLEX exit, the suspects noticed the presence of police operatives and fired at the lawmen, according to the report.

The police returned fire and killed the suspects.

The report did not mention the supposed kidnap victim.