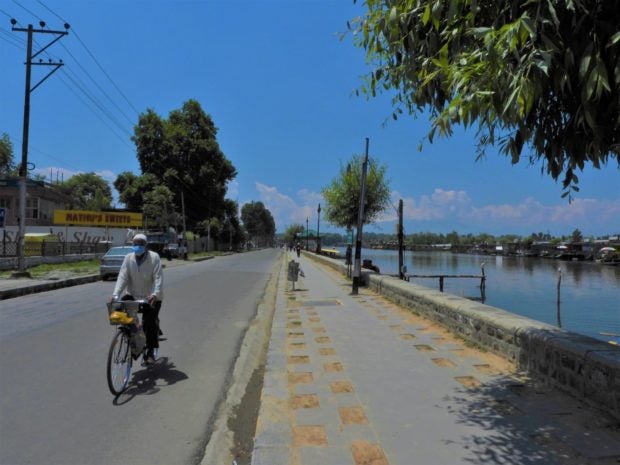 A man cycles on Boulevard Road during a COVID-19 lockdown in Srinagar, India. May 25, 2021. Thomson Reuters Foundation

SRINAGAR, India — As the coronavirus pandemic began to spread last year, charities in Indian-administered Kashmir lacked a key tool that was available to most others in the country – high-speed mobile internet.

The Indian government had instituted an internet shutdown after its decision on Aug. 5, 2019 to end Kashmir’s semi-autonomous status.

The internet blackout eased in some places last year and by the time high-speed mobile internet was restored statewide on Feb. 5, it was the longest shutdown in India’s history.

“Even sending a message on WhatsApp was impossible, not to mention uploading photos or videos on social media,” said Bilal Khan, a senior staff member of Athrout, a Kashmir-based nonprofit that provides medical help and food to COVID-19-hit families.

“Our volunteers were not able to identify those who needed help,” said Khan, adding that the organization was unable to use social media for creating awareness of the pandemic or raising funds.

This time around, as the state struggles with a deadly second wave of the pandemic along with the rest of the country, the scenario is totally different, Khan told the Thomson Reuters Foundation.

“Now, we are using social media effectively,” he said.

Besides affecting health services and contact tracing last year, the shutdown hampered the efforts of non-profit groups such as Khan’s, even as charities and citizens nationwide turned to social media for everything from oxygen cylinders to drugs.

At least 280,000 coronavirus cases have been reported in Kashmir, with nearly 4,000 dead, according to official data.

Authorities have extended a curfew until June 15 and deny criticism from medical experts and health rights activists that the vaccination rollout has been slow.

“Vaccination is going on everywhere, and oxygen is also being provided. Everything is being done,” said Atal Dulloo, financial commissioner for Kashmir’s Department of Health and Medical Education, in a phone interview.

India ranks top of the countries with the most internet shutdowns, according to digital rights group Access Now.

Despite a U.N. declaration that the internet is a human right, at least 29 countries suspended internet services in 2020, mainly during protests or elections, cutting off millions from vital information as the coronavirus pandemic raged, Access Now said in a report published in March. 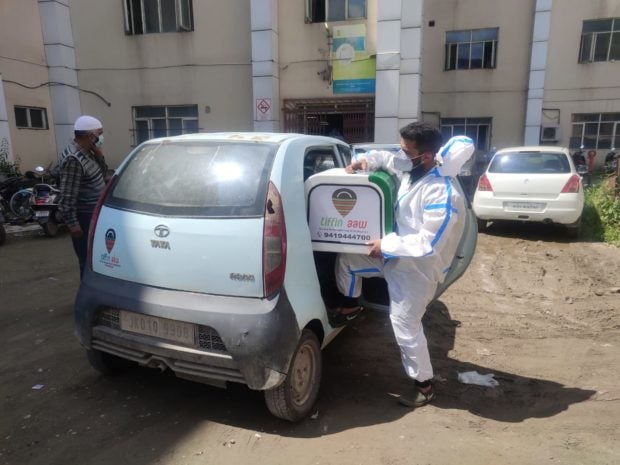 Volunteers of Tiffin Aaw, a meal delivery service, on a round to drop off food to COVID-19 patients and quarantined families in Srinagar, India. Thomson Reuters Foundation

Indian authorities said they cut communications to prevent unrest in Kashmir, where fighting between separatist insurgents and Indian security forces is estimated to have killed more than 40,000 people since 1989.

“We couldn’t have done what we are doing if we were not able to utilise social media,” said Mohammad Afaaq Sayeed, director of the charity Social Reforms Organization-Kashmir, which has helped more than 10,000 COVID-19 patients so far.

“This year, our job became much easier because of 4G mobile internet. Otherwise, we would have to use more laborious methods like going to peoples’ homes, which would have consumed a lot of time,” he said.

The organization, which helped supply oxygen concentrators, oxygen cylinders, ventilation machines and ambulances, as well as food kits with essentials such as lentils and oil, was also able to raise funds through social media, he said.

Some charities, including Athrout, found the internet especially helpful in raising funds during the holy month of Ramadan this year, said Bashir Nadvi, the charity’s chairman.

“Muslims like to do charity during Ramadan,” he said.

“When they saw the videos of our work on social media and which were shared by other people as well, it motivated them – including overseas Kashmiris – to donate.”

Access to social media has also helped small businesses thrive – and help those affected by the coronavirus.

“When word spread on social media, people started coming forward to support me – with donations and also as volunteers – and we are able to supply an average of 700 food packets a day,” he said.

Organizations like Mehram, a nonprofit started by three Kashmiri women last year, say they are also better able to help women deal with domestic violence during the pandemic.

Mehram has offered legal and other assistance to an average of three women per week during the COVID-19 lockdowns, as cases of domestic violence against women surged worldwide.

“Recently, one of the most satisfying things for us was rescuing a woman who was locked up at her in-laws’ home and was being subjected to repeated violence,” she said.

“One of her close relatives got in touch with Mehram through WhatsApp – which would not have been possible before.”