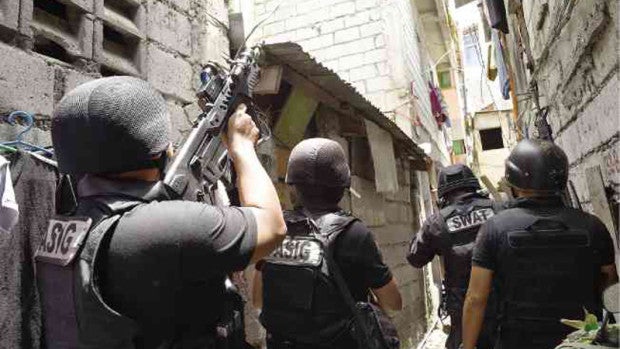 MANILA, Philippines — President Rodrigo Duterte seems to be countermanding a transparent investigation of the thousands of killings in his brutal war on drugs by the Department of Justice (DOJ) and the Philippine National Police by stopping the full disclosure of all records pertaining to antidrug operations, human rights groups said on Tuesday.

Invoking national security similar to the anti-insurgency campaign, the president said the government could not release all police records as they contained information about certain personalities that must be kept confidential.

“We have records that those who have died, but who have derogatory records in our files, and may have references to certain people and what they do, we cannot divulge it to anybody but only to the military and to the police,” he said in his televised public address on Monday night.

Duterte said that how a gunfight happened might be inquired into.

“But if you say what prompted the police and the military to go into this kind of operation based on their reports and collated dossier, you cannot go into that,” he said.

The president’s statements followed pronouncements by PNP chief Guillermo Eleazar that he would open drug war reports for scrutiny by the DOJ, whose investigation is intended to determine any liability in the deaths resulting from antinarcotics operations.

Justice Secretary Menardo Guevarra had praised Eleazar’s decision as a “very significant milestone in the government’s efforts to exact accountability.”

The drug war has been criticized for the overwhelming number of suspects killed for allegedly fighting back in what has been called “nanlaban” deaths.

Duterte’s statements were “not only an open signal but practically a marching order that effectively countermands the subsequent afterthought of a purported ‘openness’ of the PNP to have access to all files,” according to Edre Olalia, president of the National Union of Peoples’ Lawyers (NUPL).

“Once again, his subordinates get mixed and even contradictory and confusing signals for them to scramble and fix,” Olalia said. “When the principal leader speaks, those who speak too soon will have to change tune to sync with him.”

The President’s statement “only bolsters our suspicion that all this (investigation) was just for show, to mislead and appease the international community,” Carlos Conde, senior researcher for the New York-based Human Rights Watch, told the Inquirer.

“This is worrisome, of course, because Mr. Duterte has the final say in this, so, whatever good things Eleazar and [the] DOJ are planning—that’s all for naught,” he said.

Conde said that with this statement from the President, the only way for the Philippines to ensure accountability was for the United Nations Human Rights Commission and the International Criminal Court to take action.

This effort to block full access to the police files is another example of the “inadequacy and even failure of domestic mechanisms in the Philippines,” said Karapatan secretary general Cristina Palabay.

“We will be closely watching Eleazar’s actions after President Duterte’s statement, but the fact still remains — the drug war victims and their kin need answers, and they need to be afforded justice,” Palabay said.

Eleazar said the PNP would make case records that the DOJ may request available for review “as long as we do not violate the Data Privacy Law,” pointing out that he saw no problem submitting such files as the justice secretary was Mr. Duterte’s alter ego.

He said these did not pertain to the DOJ’s access to police records but to sensitive information about “ongoing police investigations,” which are part of the “traditional exception to the right to information.”

Reacting to the president’s statements, Guevarra on Tuesday said: “We’ll play it by ear.”

“There’s this concern on the part of the president so we’ll just maybe be more careful when the PNP and the DOJ examine all of these records anew,” he said.

He acknowledged that the Supreme Court had ruled that national security was not at stake in the antinarcotics campaign, but he said that the DOJ would “just make it a point to determine whether there is any national security concern involved in each particular case.”

In a ruling on April 3, 2018, the high tribunal rejected the argument of the Office of the Solicitor General (OSG) that the drug war records “involve sensitive information that have national security implications” when the OSG refused to submit PNP investigation reports on the deaths of 3,806 individuals killed in police antidrug operations from July 1, 2016, to Nov. 30, 2017.

The high tribunal said the information being sought only covered “routine police operations.”

“These information and documents do not involve rebellion, invasion, terrorism, espionage, infringement of our sovereignty or sovereign rights by foreign powers, or any military, diplomatic or state secret involving national security,” it said.

In addition, the court said the PNP “cannot claim the presumption of regularity in official functions because deaths are not supposed to occur during any of their operations.”

—WITH REPORTS FROM JEANNETTE I. ANDRADE AND MARLON RAMOS