Signal No. 2 up in 9 areas due to Tropical Storm Dante | Inquirer News
Close
menu
search

Signal No. 2 up in 9 areas due to Tropical Storm Dante 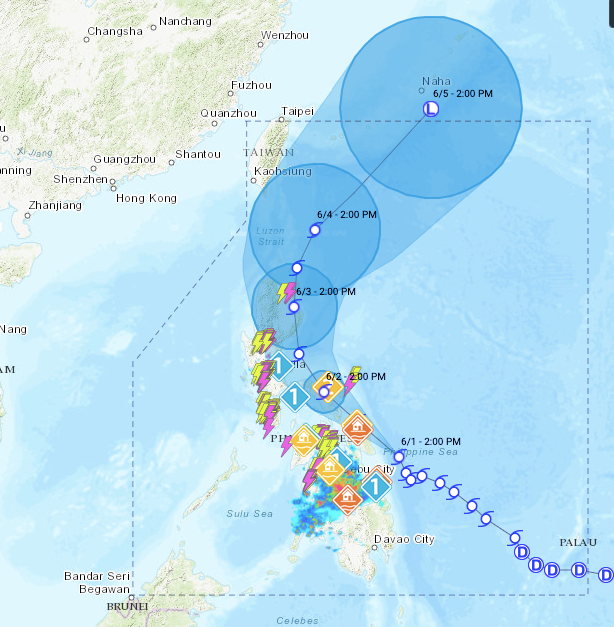 Dante was packing maximum sustained winds of 65 kilometers per hour and gusts of up to 80 kph, moving north-northwestward at 25 kph.

The following areas are under Signal No. 2:

These areas are expected to have “damaging gale-force winds” prevailing or expected within 24 hours, Pagasa said.

Meanwhile, Signal No. 1 were hoisted over the following areas, where strong winds will prevail or expected within 36 hours:

Misamis Oriental, Agusan del Sur, Bukidnon, Catanduanes and the rest of Visayas will also be likely to have light to moderate with at times heavy rains, Pagasa said.

The weather agency warned that scattered flooding, including flash floods, and landslides are “highly likely.”

Pagasa also said that rough to very rough seas will be experienced over the seaboards of areas under Signal No. 2 as well as the eastern seaboard of Carago, making sea travel risky.

Moderate to rough seas is likewise expected over the eastern seaboard of Davao Oriental and the remaining seaboards of areas under Signal No. 1.

Pagasa warned mariners of small seacrafts to take precautionary measures when venturing out to the sea.

“Inexperienced mariners should avoid navigating in these conditions,” the weather agency added.

Dante is expected to make initial landfall over Eastern Samar between Tuesday night and Wednesday early morning and is expected to remain as a tropical storm category prior to landfall.

Pagasa said Dante may weaken into a tropical depression on Thursday and to low pressure area on Saturday.