US, Australia scale back war games over COVID-19 fears 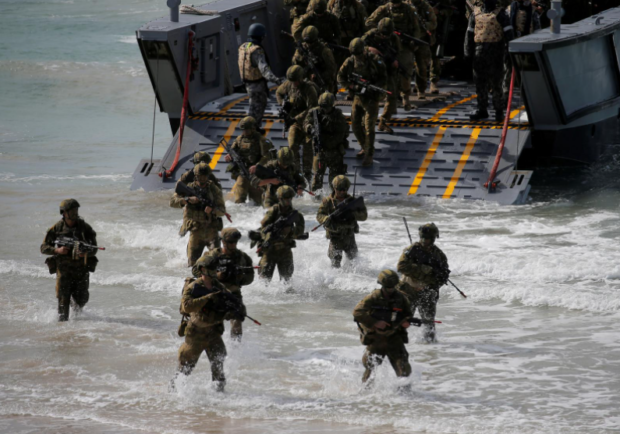 FILE PHOTO: Soldiers from the Australian Army’s 3rd Brigade step into the ocean during an amphibious assault landing on Langham Beach during the Talisman Saber joint military exercises between Australia and the United States in Queensland, northeast Australia, July 13, 2017. REUTERS

BRISBANE — A major US-Australia joint military exercise will go ahead this year despite pandemic concerns but will be significantly scaled-back, a senior Australian military officer said Tuesday.

The biannual “Talisman Sabre” war games — seen as a key symbol of the countries’ alliance — will take place in July, but will be roughly half the usual size, as the number of foreign troops entering Australia will be limited.

Vice Admiral David Johnston said about 17,000 personnel will take part in the exercise, with 2,000 foreign forces entering Australia and undergoing a 14-day quarantine.

“This year… there will be less foreign forces operating on Australian territory,” he told a Senate hearing.

“But all of those who will come in onto Australian territory will have had to have gone through quarantine practices.”

Australia has largely contained local transmission of the coronavirus and the number of overseas visitors allowed to enter the country has been tightly restricted in the last 18 months.

Both Australian and American military officials had been keen to see the exercise go ahead, not least as Australia comes under sustained diplomatic pressure from China.

Plans have been put in place to keep most of the foreign forces offshore for the duration of the exercise.

In 2019, the exercise included 34,000 mostly Australian and American personnel.