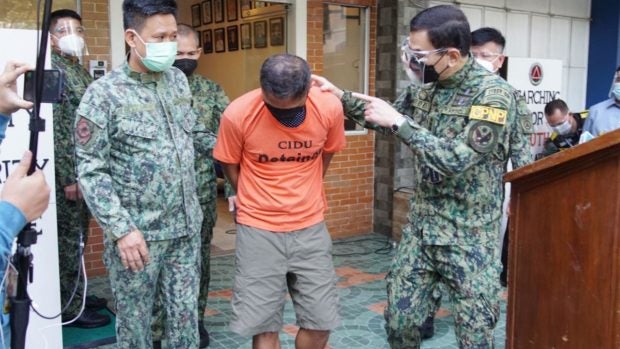 MANILA, Philippines — A police officer was arrested in Quezon City after he shot dead a 52-year-old woman Monday night while he was supposedly under the influence of alcohol.

According to a police report, the victim, identified as Lilybeth Valdez, was making a cigarette purchase at a store in Barangay Greater Fairview at about 9:30 p.m. when the suspect, Police Master Sergeant Hensie Zinampan, appeared and confronted her.

A heated argument ensued between the two, until the suspect allegedly drew his firearm and shot the victim at the back of her head.

However, a statement from the headquarters of the Philippine National Police (PNP), citing the video that went viral on social media, noted that the policeman was already holding his gun before he approached the victim.

The suspect then grabbed the victim and shot her at close range.

Police officers later responded to the crime scene, arrested the suspect and confiscated the firearm used in the crime.

Based on initial investigation, Zinampan figured in a scuffle with the son of Valdez last May 1. The PNP said the daughter of the victim told police investigators that Zinampan threatened to harm them after the incident.

(This incident is brutal and unacceptable because the police should protect our countrymen and should not act as criminal before them.)

(I have ordered to expedite the filing of administrative cases against this policeman so we can dismiss him immediately. This is on top of the criminal case we want to be filed immediately as well so that the victim can have justice.)

He also apologized to the family of the victim.