Murder photo spread so fast, but trial too slow for widow 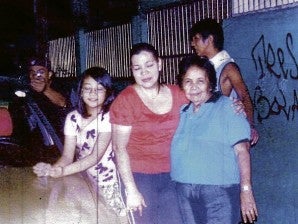 THE SHOT. The widowed Arlene Dagsa (third from left) rues the slow pace of justice a year after her husband took this chilling photo.

The now famous photo of her husband’s killer in the act of pulling the trigger quickly went viral last year.

Sadly, the “slow wheels of justice” in the country could barely match such speed, according to the widow of a Caloocan village councilman whose shooter he himself captured on camera seconds before he took the bullet.

Arlene Dagsa, wife of the slain Reynaldo Dagsa of Barangay 35 in Maypajo, said authorities had yet to put behind bars all those responsible for the crime committed on New Year’s Day in 2011.

Three of the five suspects have been arrested. But for

Arlene, the trial has gone painfully slow. “Up to now, nothing,” she said in a recent interview with the Inquirer.

This, she said, despite the existence of “real evidence” against the perpetrators, she said.

Arlene was referring to the snapshot taken by Reynaldo just outside the family residence on Tuna Street. Reynaldo was then taking a photo of Arlene, their daughter and his mother-in-law when the gunman, identified as Arnel Buenaflor, emerged from behind a car and entered the frame.

The chilling photo captured Buenaflor at the precise moment he was aiming his handgun straight at the picture taker.

It also caught in the background his alleged accomplice, Michael Rollon, who served as a lookout. Police said there was a third lookout, Frederick Sales, but he was not in Dagsa’s photo.

No less than the prestigious Time magazine featured the shot as one of the most viral photographs of 2011.

Sales, Rollon and Buenaflor have been arrested, but two other suspects—Francis Bronjal and Rommel Oliva—remain at large.

Police said they all belonged to the Pasaway Gang, a group linked to a string of robbery and murder cases in Caloocan. Investigators surmised that

Reynaldo was killed for being hot on the gang’s trail as was he then at the forefront of peace and order initiatives in Barangays 35, 28 and 31.

Arlene said her life had still “not normalized” and that the tragedy had left her “physically and mentally exhausted.” She had never missed the hearings on her husband’s murder case at the sala of Judge Oscar

“I have already spent a lot in lawyer’s fees. My work is sometimes affected because I have to be absent,” said Arlene, who was appointed Barangay 35 administrator after her husband’s death.

She noted that more than a year after the crime, the court had only conducted seven hearings. Some of them even had to be rescheduled because of the failure of the police investigators to attend, she added.

“At one point, I had to go to the substation myself to get hold of one of the investigators for him to appear in court. One day, I found him sleeping while he was on duty,” Arlene recalled.

“They said that it would be over soon, but I don’t know,” the widow said. “I just hope that they can speed up the process.”