MANILA, Philippines — In October 2019, police officers manning a checkpoint in Tandag City, Surigao del Sur province, stopped two luxury vehicles for a cursory scan, only to realize they had stumbled upon a multimillion-peso smuggled haul.

The three men inside the vehicles, who were from different cities in Mindanao, were transporting nearly 340 wild animals—an assortment of birds, reptiles and mammals—crammed in cages. They could not present any permits for their cargo, valued at least P95 million in the local market.

They said the animals were en route from Mati City, Davao Oriental province, to Pasay City in Metro Manila, a distance of over 1,500 kilometers, but these could have originated much farther.

Wildlife law enforcers said the rescued species, which included 156 blue-tongue skinks, 40 sulphur-crested cockatoos and seven cassowaries, were not endemic in the Philippines and most likely poached from neighboring Indonesia and Papua New Guinea.

The three men were arrested and charged with illegally transporting wildlife, but after three months of trial, they were sentenced by the court to pay only a fine of P5,000 each.

This conviction illustrates how the Philippines struggles in its gargantuan fight against wildlife trafficking and illegal trade.

Despite government efforts to step up surveillance and enforcement operations, wildlife criminals get away with mere slaps on the wrists. The measly penalties are but momentary hiccups in a lucrative business where kingpins evade justice, and in the few cases of convictions, the small-time smugglers — often coerced to take on jobs with promises of easy profits — take the fall.

The difficulty in prosecuting wildlife cases stems from a myriad of challenges, from scarce resources to scant wildlife knowledge on both enforcement and judicial sides. Experts point to another weak link in the chain: the 20-year-old Wildlife Resources Conservation and Protection Act, or Republic Act No. 9147.

The law seeks to conserve and protect wildlife species and their habitats, and regulate the collection and trade of wild animals. But two decades since it was passed, both government officials and wildlife experts agree that it no longer responds to the current magnitude of wildlife crime.

In the Philippines, which serves as source, transshipment and destination points for wildlife, at least P50 billion is lost annually due to the illegal trade when economic and ecosystem services are factored in, according to the Asian Development Bank.

“I think there is a lack of appropriate provisions under existing legislation that deals with wildlife trafficking, not only as a simple environmental crime but as a transnational crime,” said lawyer Teodoro Jose Matta, executive director of the Palawan Council for Sustainable Development, an attached agency of the Department of Environment and Natural Resources (DENR) that oversees the environmental plan in biodiversity-rich Palawan province.

“With the environmental damage that wildlife criminals do, it’s an intergenerational crime,” Matta said.

The penalties prescribed by RA 9147 no longer serve as deterrents to big criminal networks and poachers by opportunity, according to wildlife law enforcers.

“It is kind of frustrating for us enforcers [that] after these painstaking efforts of running after the criminals, they only end up serving the least of the penalties,” said lawyer Theresa Tenazas, officer in charge of the wildlife resources division of the DENR’s Biodiversity Management Bureau (BMB).

“However, it is the law that provides them or allows them to avail [themselves] of the protection, or…the least penalty that requires less punitive [action],” she said.

Records from the BMB showed that out of 144 wildlife enforcement operations carried out between 2013 and 2020, only 102 cases had been filed in court. In this seven-year period, there are 31 confirmed convictions, with trial courts handing down sentences to 67 criminals. The rest of the cases are ongoing, at least based on their records, said Tenazas, but most are not updated to reflect actual statuses. 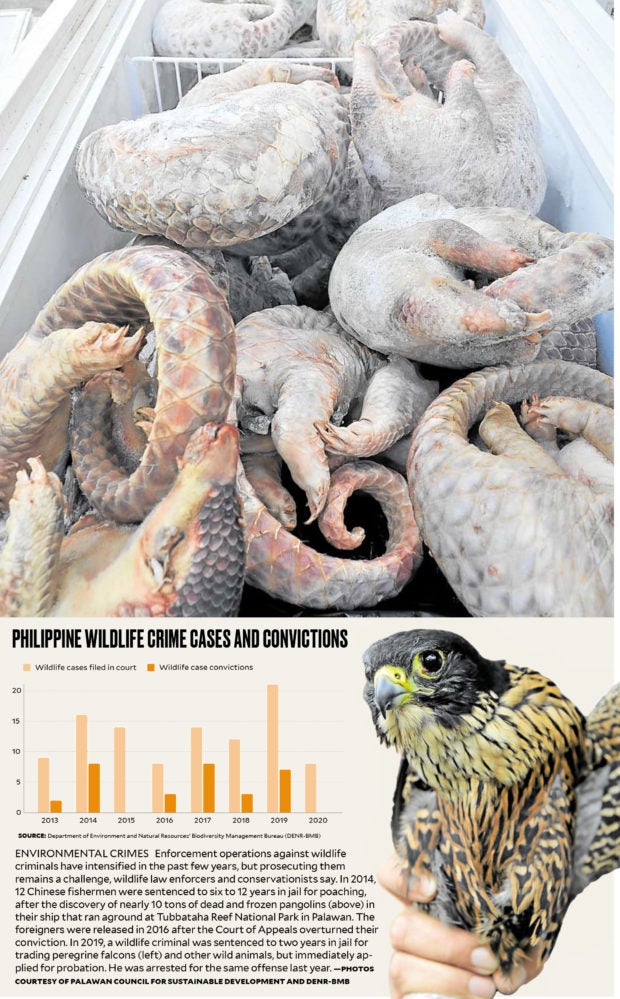 The BMB, based in Quezon City, gathers wildlife enforcement reports submitted by 16 regional environmental offices and other partner agencies across the country. The government does not have a centralized database to closely monitor wildlife crimes and validate its success in fighting transnational offenses.

Of the 31 confirmed convictions of illegal wildlife traders and traffickers, data studied by the Inquirer showed some only received minimum jail time and fines. Under the wildlife law, penalties depend on both the illegal act and conservation status of the seized wildlife.

For illegal transport of wild animals not considered threatened, the penalties can go as low as a paltry P500 and five days behind bars.

Wildlife law enforcers say this means that accurate identification of wildlife in case documents are crucial in determining penalties.

But challenges also hound the proper scientific knowledge of enforcers, especially in far-flung provinces. The courts, too, do not take into account the number of wildlife involved in each seizure in deciding the penalties.

“Let’s say you’re trading a pangolin, you still receive a low penalty even if you have 10 pieces,” said lawyer Edward Lorenzo, policy and governance adviser of Conservation International Philippines, of the critically endangered species. “You’re still being charged with one act.”

“Even if you sell a hundred birds, if their classification is near-threatened or vulnerable, selling or transporting them would still result in low penalties,” he added.

In some cases, the penalties handed down are nowhere near the actual market value of the animal in possession or being traded. INQ

(This story was produced with the support of Oxpeckers Center for Investigative Environmental Journalism and Internews’ Earth Journalism Network. –Ed.)