As lockdowns forced millions of people to stay home, a deluge of plastic products went past right under our noses, driven by that button on online shopping sites that says “add to cart.”

As the lockdowns emptied mall stores of workers and customers, the rise in online shopping broke records, opening the doors to thousands of deliveries. The use of protective gear made of plastic, like face shields, also went up the roof.

The shift in shopping behavior spurred by the pandemic became a wake-up call for many people on the disastrous impact of massive plastic use and a dearth in safe ways to dispose of used plastics.

One of these individuals was Rachelle Lacanlale, who found the pileup of discarded plastics to be so frustrating but at the same time as an opportunity to take action.

Lacanlale took her frustration a step further and used it as inspiration to start a project on upcycling. While recycling converts plastic wastes into new plastic to be used for the same or another purpose, upcycling makes use of these wastes on products that are improvements of their previous forms.

Lacanlale started an initiative that she calls JuanBag that upcycles plastics into bags.

She told INQUIRER.net that the project started when the pandemic hit and online shopping peaked like never before in 2020.

JuanBag is a start-up and social enterprise that uses post-consumer plastic, like courier pouches and bubble wraps used in online shopping deliveries, to promote a sustainable way of using plastics by turning these into reusable bags.

Its bikers have been picking up plastic bags from households across Metro Manila free of charge in the past few months, with at least 30 kilograms of plastic donated and more plastics for pickup yet to be collected. 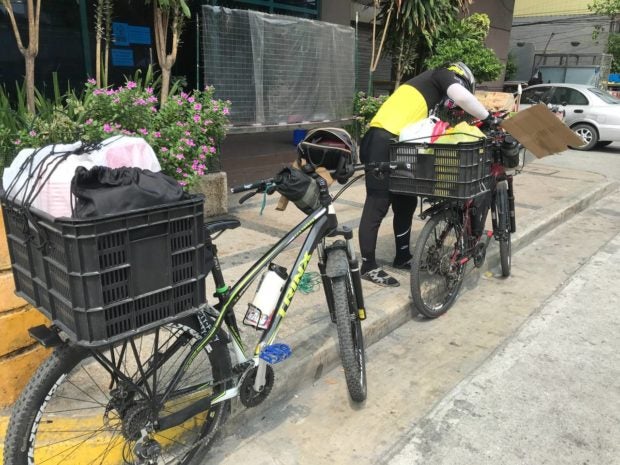 “In JuanBag, we want to make a bag out of plastics,” said Lacanlale.

“Our goal is to use that as an alternative for the packaging for couriers. What if we just have one type of bag?,” she said. “We’re designing it in a way that there’s only ‘Juan,’ as in one bag for all your online shopping.”

Plastic packaging accounts for nearly half of all plastic waste globally and is usually thrown away within minutes after use, a 2018 United Nations Environment Program study said.

And this is exactly what JuanBag wants to change—consumer behavior towards plastic.

Instead of disposing of courier pouches after one use, Lacanlale said her initiative hoped to have the bags reused using the same system as sari-sari store owners require a deposit to ensure customers would return empty soda bottles. There would also be a quick response (QR) code in the bags that would tell the consumer how many plastics the bag was made of and how many times it has been reused.

“It’s a culture shift. We’re thinking what would happen with the bag. We’re hoping a lot will return it,” Lacanlale said.

JuanBag is still in the process of designing and developing the bag itself. By the end of June, Lacanlale said she intends to test it in the market through partner online shops selling home decor, beauty products and gadgets.

More often than not, people do not realize the high value of plastic—something that Cloop Technologies knew would be reliable in creating livelihood opportunities for low-income communities.

Cloop, short for “closing the loop,” is also a social enterprise that upcycles plastic waste into sellable items like pots, trays and other items.

“What we do is we upcycle plastic by converting it into something with higher value,” said Ric Alindayu, Cloop CEO. 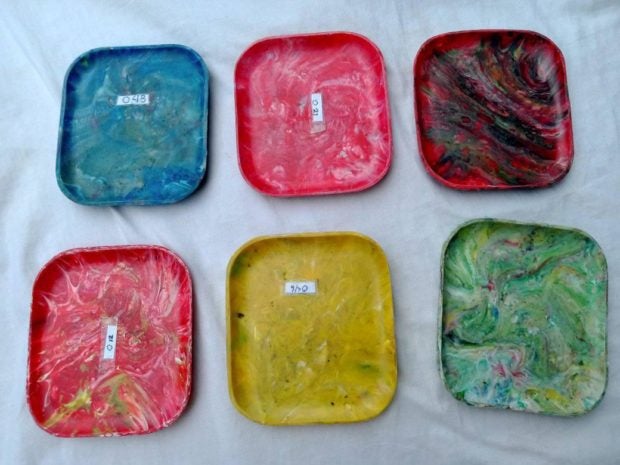 “To do that, we use melting machines that can melt the plastic down and then shape it into different products,” Alindayu said.

The idea was born sometime in 2019 as part of a student project, then called “Project Plastikan,” at the University of the Philippines-Diliman which won the country’s first ever Climathon hosted by Pasig City.

Cloop has since partnered with the city’s Barangay Pineda that recently built a materials recovery facility, where waste is collected and segregated. 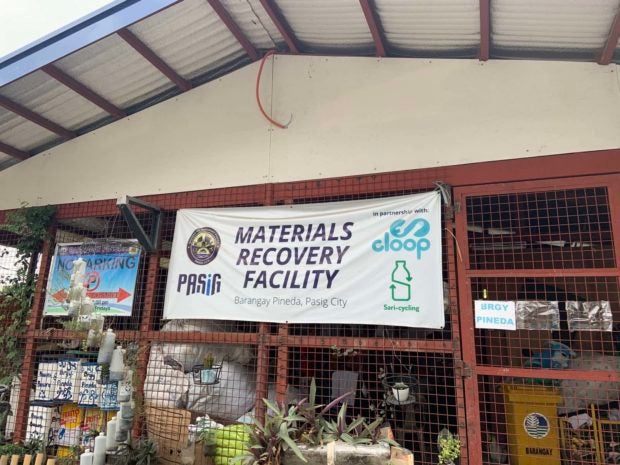 THE materials recovery facility set up by Cloop and Barangay Pineda in Pasig City. CONTRIBUTED PHOTO

“We are working together on establishing a product line so that the plastic waste that is generated by the community can be converted into something of higher value and can be eventually sold,” Alindayu said.

It takes a village to reduce pollution

Alindayu’s team has worked closely with Barangay Pineda’s residents by providing training—offline and online—on safely using machines for melting plastics, practicing health protocols while doing that and making items made of melted plastics.

“At first, they really had no idea. This is a technology push,” Alindayu said. “But they were very open to the training. They were really participative in our workshops, they also generated ideas on products to make. They were very involved in the process, not just in the receiving but also in the giving.”

In Cloop, Alindayu said products known as thermoplastics are made. These are plastics that melt and harden upon cooling.

The consumption of plastics currently follows a linear pattern. The product is bought, used, wears out and disposed of. What happens after these had been thrown away hardly enters the equation. 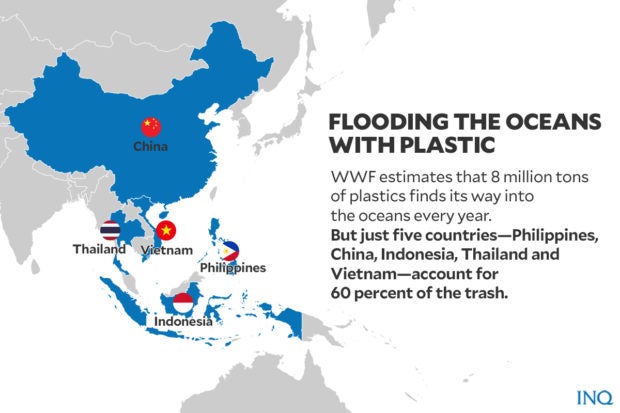 So much plastic waste either ends up in a landfill or in our oceans. According to a World Wide Fund report published in 2020, an average of eight million tons of plastics enter oceans annually. While it is a global problem, studies show the Philippines, China, Indonesia, Thailand and Vietnam contribute 60 percent of the marine plastic debris entering the ocean.

What can I do?

For JuanBag’s Lacanlale, doing a “Marie Kondo” (a decluttering guru made famous in Netflix) on her room made her review her plastic-reliant lifestyle.

“I did a Marie Kondo in my life, in my room,” she said. “And then I asked a question: What will happen to all of these things that I’m about to throw away? That’s the curiosity I had.”

Since then, Lacanlale had joined environmental organizations and taught herself how to become a “mindful consumer.” But because it was convenient to use plastics, she admitted it was hard to convince friends and even her family to join the behavior shift.

“We’re after convenience. There’s the sense of ‘it’s not gonna affect me anyway’,” she said.

But more than just adopting a zero-waste lifestyle, Lacanlalae said she realized that her efforts alone are not enough so she joined campaigns and signed petitions calling on big companies and the government to take action on plastic pollution.

In a 2019 report by the Global Alliance for Incinerator Alternatives, it was revealed that Filipinos were using 164 million sachets, 57 million shopping bags, and 45.2 million thin-film bags on a daily basis. 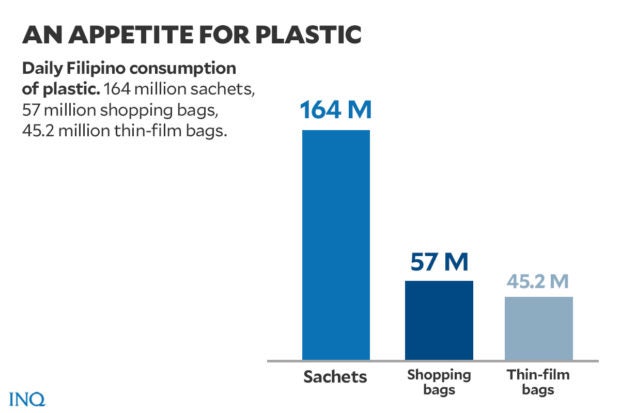 Filipinos’ right to a healthy environment had been enshrined in Republic Act No. 9003, or the Ecological Solid Waste Management Act of 2020, which is considered a landmark law on waste management in the Philippines.

But the legislation seemed to be not enough, said Cloop’s Alindayu. He said he believed the problem lies in implementation.

“But the only problem maybe is the lack of strict enforcement,” Alindayu said.

“If our officials would properly enforce proper collection and segregation of waste, if there’s a strict ‘no segregation, no collection’ policy, that would really help a lot for initiatives like Cloop,” he said.

For now, Alindayu advised the public to properly segregate plastic waste by looking at recycling signs and the number inside.

“Bottle caps are number two. When you see number two, it’s HDPE, it’s easily recycled, you can set it aside,” Alindayu said.

“If you see number four, that’s LDPE, these are the bags that Shopee and Lazada use and are easily recyclable, set it aside,” he said.

“The best way an average person can contribute is to properly segregate and set aside the plastic waste and donate it to social enterprises and businesses that properly recycle it,” he said.

“There are a lot of opportunities to do so and it starts really with proper collection and segregation.”