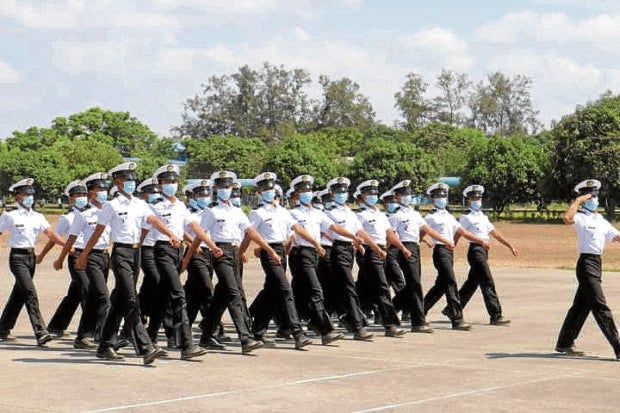 CONFINED The 213 members of Class 2024 of the Philippine Merchant Marine Academy (PMMA) in San Narciso town, Zambales, are formally recognized during a ceremony in April. Despite being confined in the academy, over 100 cadets here have contracted the coronavirus disease following an outbreak that was traced to the infection of a 21-year-old cadet on May 23. —PMMA FACEBOOK PAGE

Dr. Noel Bueno, Zambales health director, said 125 cadets age 18 to 28 were among the latest to contract the virus after the first infection was detected on May 23.

The source of the infection was a 21-year-old male cadet although it was not immediately known how he contracted the virus.

Bueno said the 308 direct contacts of the first case were subjected to swab tests and three more were confirmed positive for COVID-19 on May 26. Five more cadets turned out to be infected after their swab tests on May 27.

The infection soon spread, with at least 120 of the infected cadets showing some symptoms of the disease, such as fever, cough, colds, sore throat, headache, body malaise and diarrhea.

According to Bueno, the two other COVID-19 cases in the academy were an administrative staff member and a tactical officer. Both of them showed no symptoms of the disease.

The outbreak has forced the academy to place it on a lockdown for an indefinite period starting last week.

There are about 900 persons residing and working inside the campus, around 800 of whom are cadets.

It was the first time that the academy has been hit by a COVID-19 outbreak, as it had managed to ward off the disease since the pandemic broke out last year until its first infection last week, Bueno said.

He said the infection in the academy puzzled health authorities because all of the cadets were confined inside the school premises since the new batch was admitted in August last year.

The management of the PMMA has yet to issue a statement but sources said the infection could have been spread by visitors to the academy.

Bueno said the infected PMMA cadets and employees were placed in an isolation facility inside the academy.

The number of COVID-19 cases at the academy had surpassed the province’s highest tally of 66 that was recorded after an outbreak in a business process outsourcing company in the capital town of Iba last month.

The province now has a total of 2,431 COVID-19 cases since the pandemic was declared in March last year, 415 of which are still active.

At least 1,962 patients had also recovered from the disease while 53 had died. —JOANNA ROSE AGLIBOT INQ