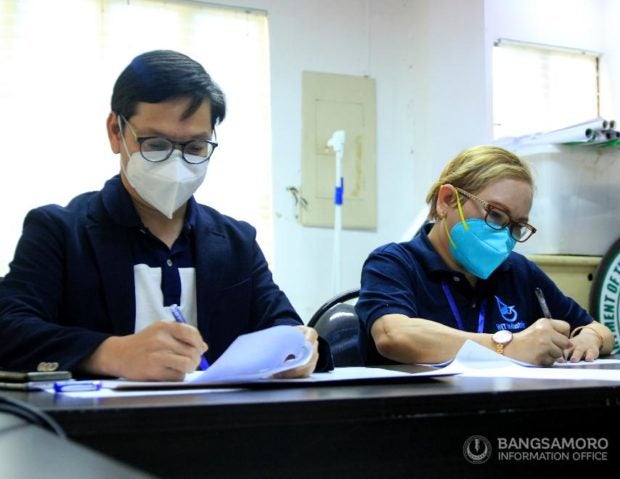 SAFE DRINKING WATER, AT LAST. Residents of the island provinces of Basilan, Sulu and Tawi-Tawi will soon have potable and safe drinking water, a basic commodity that remained scarce for them for generations. BARMM Interior Minister Naguib Sinarimbo and Donna Faizo, WET representative, sign the contract for the water project. CONTRIBUTED PHOTO (from BARMM)

Recently, the BARMM entered into a contract, through the Ministry of the Interior and Local Government, with Texas-based Water Equipment Technologies Inc. for the project.

According to Interior Minister Naguib Sinarimbo, five desalination facilities will be built in Sulu and another five in Tawi-Tawi.

In Sulu, the project will mainly serve the municipalities of Pangutaran, Pata, Hadji Panglima Tahil and Pandami.

Sinarimbo noted that many families in the BARMM’s island provinces experience daily hardship such as traveling for four to five hours just to have access to potable water supply.

Digging wells is not an option for the island communities, Sinarimbo said, as these do not yield potable water.

“We’ve been battling this problem for probably as old as time, and I am perplexed by the fact that no serious attempt has been made to resolve this issue [in the past],” he said.

Sinarimbo said the project was the “first bold step” of the regional government in addressing the lack of potable water in the island provinces. He added that similar facilities would also be deployed in Basilan province.

During a public consultation with civil society and community leaders throughout the region, the issue of lack of potable water supply was raised to Interim Chief Minister Ahod Al Haj Murad Ebrahim who promptly said that the setup of desalination facilities was a priority in the regional development program.—EDWIN O. FERNANDEZ INQ