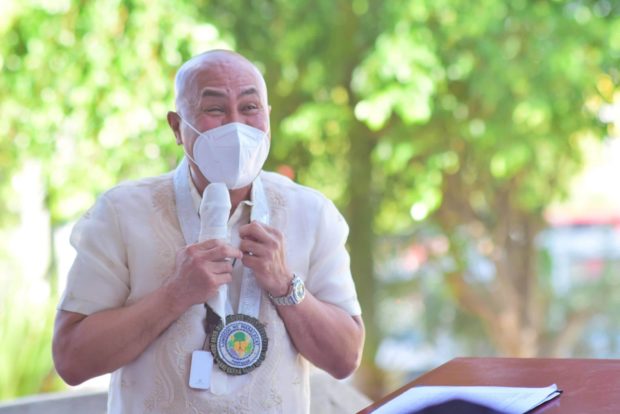 Mayor Crisostomo Garbo speaks to city government employees during a recent event at the city hall. (Photo from the City Government of Mabalacat)

MABALACAT CITY, Pampanga – Elated over the dismissal of the technical malversation case against him, this city’s Mayor Crisostomo Garbo described the Ombudsman’s resolution as “justice for the wrongfully accused.”

“Whatever their motives were, it is clear to the people of Mabalacat that the funds were used in its most forthright way. Transparency and accountability have been my consistent pillars in local governance,” Garbo said in a statement on Saturday, May 29.

For not citing the number of job order (JO) employees and their salaries in two appropriation ordinances, the Ombudsman dismissed the technical malversation complaints filed against the mayor here and four city hall officials.

Former city councilors Rogelio Yumul and Jerry Basilio filed the case on January 4, 2019, saying the some 2,585 JO employees did not receive their salaries from November 16 to December 31, 2018, as the fund was instead used to pay the some 300 so-called “special rate” employees who received as much as P30,000 per month from the city government.

This, the complainant said, constituted illegal use of public funds or technical malversation under RPC’s Article 220.

They cited the city council’s Appropriation Ordinance no. 6, series 2017, and AO no. 8, series 2018, which granted supplemental funds for the salaries of city hall employees, including the 2,585 JO employees.

But in the resolution penned by Ombudsman graft investigator and prosecution officer Cristyl Mae Senajon on January 27, 2020, she said the two appropriation ordinances “did not specify the number of JO personnel to be hired as well as the rate each is entitled to receive.”

“Although in Appropriation Ordinance No. 6, Series of 2017, specifically under the category of Object of Expenditures, the salaries and wages of regular and casual are indicated, it does not specify how many JO personnel will be hired or under the employ of the City,” she stated.

The Ombudsman resolution also said the AO no. 6 “does not designate the proper salary grades for each JO personnel” while AO no. 8 “does not contain any specification as to the number of JO personnel and their corresponding salary rates.”

“Thus, the charge against respondents for violation of Article 220 of the RPC must be dismissed,” it stated.

The Mayor’s Office here received a copy of the resolution on March 22, more than a year after its promulgation, and released it to the public only last Saturday.