Two elderly communist leaders slain at home in the Visayas 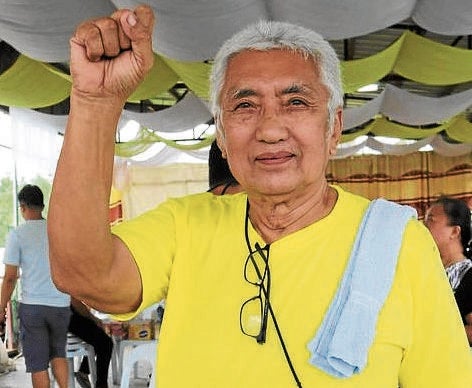 ILOILO CITY, Iloilo, Philippines — Two elderly consultants to the National Democratic Front of the Philippines (NDFP) in the aborted peace talks were killed in separate incidents on Friday night, one by assassins in Cebu and the other by the police during a raid in Iloilo.

Killed in the raid was Reynaldo Bocala and his companion, Willy Epago, who allegedly put up a fight against officers who tried to serve warrants for his arrest at his house at Barangay Balabag in Pavia town, Iloilo.

Bocala, husband of NDFP consultant in Panay, Maria Concepcion “Concha” Araneta, allegedly occupied various positions in the rebel movement, including deputy secretary of the Communist Party of the Philippines (CPP) in Panay. He was to mark his 75th birthday next month. There was a P4.8 million price on his head.

In Cebu, former priest Rustico Tan, 80, was gunned down by unidentified assailants while sleeping on a hammock inside his house on Camotes Island.

Tan left the priesthood several decades ago and joined the New People’s Army (NPA). He later served as peace negotiator during the administration of President Corazon Aquino. He was still an NDFP peace consultant before his death.

Since the collapse of the talks under President Rodrigo Duterte, four other peace consultants to the NDFP had been killed — Randall Echanis, Randy Malayao, Eugenia Magpantay and Agaton Topacio.

Ladlad, Casambre and Silva were among 19 people recently designated as terrorists under the antiterror law. They also include CPP founder Jose Maria Sison, who lives in exile in the Netherlands, and Rafael Baylosis, who was arrested on illegal arms possession charges which were dismissed by the court.

Police Staff Sergeant Florente Gorrea, an investigator with the Camotes police, said Tan’s killing “seems” to have “something to do with personal grudge.”

The CPP condemned the killings “in the strongest terms.”

“It is an outrage that the fascists are targeting NDFP peace consultants who are in their senior years,” CPP spokesperson Marco Valbuena said in a statement on Saturday.The party ordered the NPA, its armed wing, “to punish the criminal perpetrators of these murders.”

It pointed to Duterte and the National Task Force to End Local Communist Armed Conflict as “masterminds” of the killings.

“Clearly these were coordinated at a high level with the aim of driving terror into the hearts of the people and their revolutionary forces,” the CPP said.

The raid on Bocala’s home and the attack on Tan, who was more than 200 kilometers away in Pilar town, occurred around 8:20 p.m. on Friday.

The CPP said Bocala and Epago were killed “tokhang-style” as they could not have fired at the raiders because they were unarmed.

The rebels’ peace consultants “are being summarily executed in line with Duterte’s the ‘take no prisoners’ fascist policy in the vain hope of making the people and their revolutionary forces surrender to his terrorist regime,” the CPP said. Formal negotiations under the Duterte administration ended in November 2017 after the President reportedly was dismayed over continued rebel attacks against government troops while talks were ongoing.

He subsequently declared the CPP and NPA as terrorist organizations.

Presidential spokesperson Harry Roque on Thursday said the communist rebels would be hounded wherever they are even in their old age like the Nazis of Germany after World War II.

He was responding to a question during a press briefing on what measures were being taken by the Duterte administration to make the CPP indemnify its victims of human rights abuses and atrocities. “Let us see, and I’m sure that like the Nazis, many of whom hid and grew old but were still arrested and 50 years later were held to account, I am confident that the CPP-NPA will not escape their crimes. Justice will catch up with them,” he said.

In a statement, Brig. Gen. Rolando Miranda, Western Visayas police director, said the killing of Bocala will “gravely affect” the operation of the CPP and NPA in Panay “because he [was] the one managing the finances of the (CPP in Panay).”

He was monitored to have been staying at the house in Pavia just three days before the raid.

Bocala was wanted on charges of murder, arson and robbery in various courts, the police said.

Bocala also had with him a “Document of Identification No. PP 978525” issued by the NDFP on Aug. 26, 2016, designating him as “consultant” for the Visayas. This was supposed to give him immunity from arrest under the NDFP-government Joint Agreement on Safety and Immunity Guarantees.

Unlike his wife Concha Araneta, he was not among the NDFP consultants who were seen and known publicly and attended the peace negotiations in Norway.

Bocala was captured in 2001 in a firefight with government troops in Igbaras town in Iloilo but was released on bail and assumed to have rejoined the rebel movement.

His wife, the alleged head of the CPP in Panay, was captured in Iloilo City in 2015. She was allowed to post bail in 2016 as a consultant of the NDFP and joined the peace negotiations between the government and the NDFP in Norway.

Shot while in hammock

Araneta disappeared following the collapse of the peace talks but has been releasing statements online as NDFP Panay spokesperson.

She is also being sought by the PNP and the military after the peace talks collapsed.

Tan was defenseless, asleep on his hammock as bullets smashed into his face and body.

According to Tug-ani, the official student publication of the University of the Philippines Cebu, Tan was arrested in 2017 in Santander town, Cebu, based on 14 warrants of arrest for murder issued by the Regional Trial Court Branch 47 in Bohol.

The charges were dismissed by the court in October 2019.

Tan was again implicated in another murder case in Bacolod City in Negros Occidental but was released in March 2020 on recognizance.

After his release, he went into organic farming on Camotes Island.

—WITH REPORTS FROM DEXTER CABALZA AND INQUIRER RESEARCH