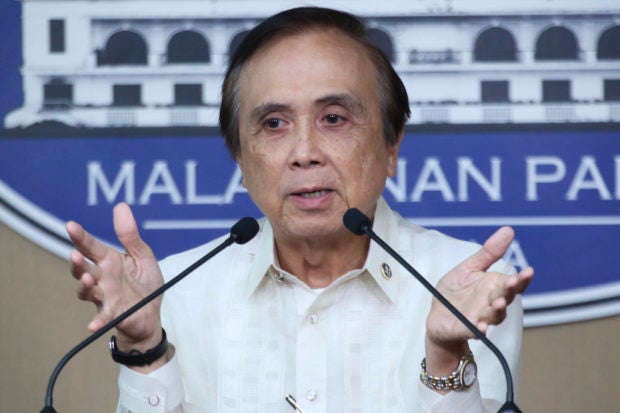 MANILA, Philippines — A former member of the Duterte Cabinet on Friday said the country’s next president should “vigorously defend” the West Philippine Sea (WPS) to avoid losing more in the disputed region.

According to former socioeconomic planning chief Ernesto Pernia, the country has been “losing much in WPS” that the leader who succeeds Duterte should focus on the issue.

“We’ve been losing much in WPS, and we could lose more. Our next leader must vigorously defend what’re ours. No ifs and buts!” he said on Twitter.

We’ve been losing much in WPS, and we could lose more. Our next leader must vigorously defend what’re ours. No ifs and buts!

Pernia’s tweet prompted some replies implying whether the current leader — his former boss, President Rodrigo Duterte — was not doing enough to secure assets in the WPS.  The former National Economic and Development Authority secretary has not replied to those comments as of this posting.

But Duterte and his administration have been receiving flak for supposedly prioritizing cozy relations with China over sovereignty issues. According to former Supreme Court senior associate justice Antonio Carpio and former foreign affairs secretary Albert del Rosario, Duterte must use the historic win of the Philippines before the UN-backed Permanent Court of Arbitration (PCA) against China.

In that July 2016 decision, the PCA said that the Philippines has exclusive rights over the WPS and that China’s nine-dash line claim has no historical and legal basis.

However, Duterte maintained that the only way to retake WPS is through force – that a war would be too costly for the Philippines. Also, Duterte repeatedly said that his Chinese counterpart, President Xi Jinping, has warned him of possible military conflict should the Philippines push its claims over the disputed waters.

Maritime issues between China and the Philippines took the center stage once again after the National Task Force on the West Philippine Sea (NTF-WPS) reported the presence of over 200 Chinese ships near the Julian Felipe (Whitsun) Reef, which is just 175 nautical miles west of Bataraza, Palawan.

This means the ships are well within the country’s exclusive economic zone.