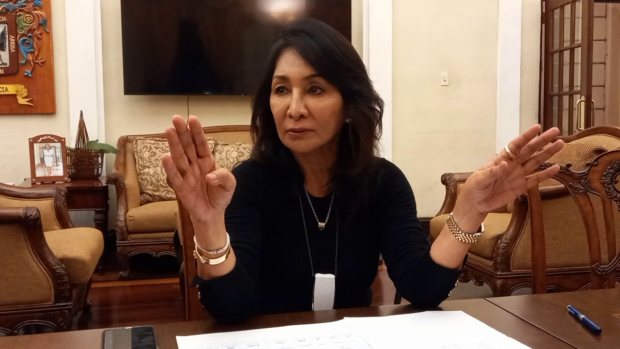 In an interview, the governor said she wants to clear things out regarding a local protocol for incoming passengers from abroad.

“I have no power over Metro Manila. It is beyond my control because my executive order cannot cover Cebuanos that land in Manila. We hope that this is going to be temporary because this is really an additional burden for Cebuanos from abroad,” she said.

The Cebu provincial government earlier decided to test all Filipinos from abroad upon arrival at the airport, contrary to the protocol set by officials of the Inter-Agency Task Force (IATF) for the Management of Emerging Infectious Diseases who said testing should be done seven days after their return.

Based on Garcia’s executive order, Filipinos from abroad arriving at the Mactan Cebu International Airport (MCIA) will undergo a swab test upon their arrival and will wait for its result in a quarantine hotel for two to three days.

Those who test positive will be transported to isolation facilities.

If the result comes out negative, returning Filipino travelers from abroad who are not from Cebu will be allowed to proceed to their final destination to follow the protocols of their respective local government units.

On the other hand, those from Cebu province will be allowed to go home to continue to be quarantined. They will undergo another swab test on the seventh day.

The system prescribes a shorter quarantine period for returning Filipinos from abroad than the national government’s policy.

Last Tuesday, Garcia revealed that she received information from Marinduque governor and League of Provinces of the Philippines President Presbitero Jose Velasco Jr. that Presidential Spokesperson Harry Roque and Justice Secretary Menardo Guevarra plans to sue her for continuing to be “defiant” of the Inter-Agency Task Force (IATF) for the Management of Emerging Infectious Diseases protocols.

Interior Secretary Eduardo Año, she said, was privy to the plan.

“They say I am defiant. (But) I am not defiant. I’m just trying to look for the best possible way to implement policies that will not further burden our people,” she said.

Garcia said Presidential Assistant for the Visayas Michael Dino arranged a meeting with the President so she could explain the reason behind the law protocol for incoming passengers from abroad.

“I want to meet with the President so we may be able to present how our processes do not necessarily defy IATF guidelines. We are innovating it instead in order to custom fit our situation here and also to understand that these OFWs (overseas Filipino workers) and returning Filipinos are humans, just like us,” said Garcia.

“There has to be a humanitarian aspect as well as consideration for added financial burden to them (overseas Filipinos),” she added.

Garcia said there is huge pressure to force her to suspend the province’s custom policies.

But the governor said she would stand firm on her decision and that it should not be considered disrespectful to the President.

“I will keep the faith because I know that I have not done anything wrong. I am doing what is right for Cebu and the Cebuanos,” Garcia said.