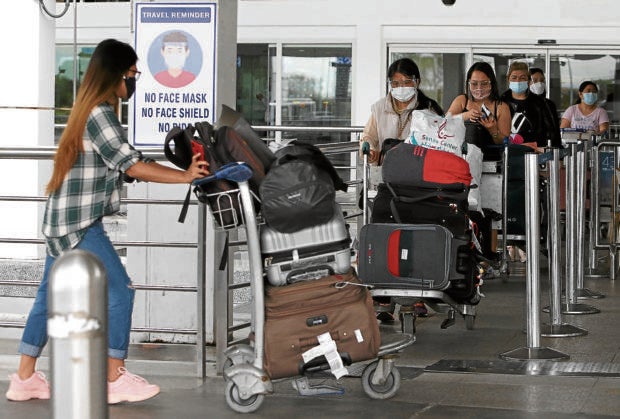 The order, issued by Malacanang on Thursday (May 27), came after the provincial government of Cebu issued an order on testing of returning Filipino passengers—OFWs and non-OFWS—which differed from the one laid down by the national Inter-Agency Task Force for the Management of Emerging Infectious Diseases (IATF).

The national government said the order, by Cebu Gov. Gwendolyn Garcia, included protocols that had been contrary to those set by the IATF.

What was the governor’s order that prompted such a response from Malacanang? What would be its effects on passengers?

Then they’ll have to get RT-PCR tests on arrival and have a pre-booked hotel room to isolate themselves in until test results are out.

The EO said current requirements for OFWs or returning residents to go on quarantine and be tested only on the fifth day of their arrival “puts a heavy financial burden” on returning Filipinos.

The governor’s order said the current rule also “bludgeons the finance of OWWA that may very well be used for other purposes.” OWWA is Overseas Workers Welfare Administration, the government agency in charge of OFW welfare.

Garcia’s EO also provided that those with negative test results would be cleared to go home but those who would test positive would have to further heed health protocols.

The order, which took effect in Cebu province last March 31, was the result of a meeting between Garcia and officials of government agencies—OWWA and MCIA—and representatives from three airline companies and the Hotel and Restaurant Association of Cebu.

Garcia’s order, however, appeared to counter that of the IATF which required passengers arriving from abroad to go on quarantine for 10 to 14 days and be tested on the seventh day of their return.

The IATF order also required passengers to go on four more days of quarantine when they arrive in their final destinations.

LIST: What OFWs, non-OFWs must do prior to and upon arrival in PH

Non-residents of Cebu are covered by the IATF rules, Loreche said.

Testing on arrival at Cebu airport a must for OFWs, travelers from abroad

The directive also instructed all government agencies to ensure that inbound international travelers in all ports of entry will heed the national government’s testing and quarantine protocols.

“Heads of departments shall ensure that all offices and instrumentalities under or attached to their departments abide by this directive, while the Department of Interior and Local Government (DILG) shall enforce compliance with respect to LGUs,” said the order.

Why transfer to Manila?

Medialdea said the order was issued upon the recommendation of the IATF and “in pursuit of the national interest in preventing the further spread of COVID-19 in the country.”

According to the DOH, the National Capital Region (NCR) has more than 10,000 active cases as of May 27. Cebu City has 300 active cases.

But why bring more passengers, who need to be tested, to where COVID-19 is most prevalent?

While the average daily cases in NCR declined in the last few days, the reproduction of SARS Cov2, the highly contagious virus that causes COVID-19, is still close to 1—0.82 as of March 23, according to the UP COVID-19 Pandemic Response Team. It means each infection case was likely to produce one more case.

The reproduction number in Cebu in the same period was 0.90. The threshold is 1.00.

The DOH said it was waiting for advisory from World Health Organization (WHO) that would say if there’s already community transmission in the Philippines of the different variants of SARS Cov2, which are considered to be more contagious.

Health Undersecretary Ma. Rosario Vergeire, at a media briefing on Friday (May 28), said while the DOH had already identified the variants detected in the Philippines, WHO has yet to issue an assessment report about whether these variants are already spreading through community transmission.

Medialdea’s memo did not say why the flight diversion was necessary, but there had been reports about the lack of quarantine facilities in Cebu being one of the reasons.

Last May 12, the Civil Aeronautics Board (CAB) issued an advisory limiting the number of international arrivals in the MCIA.

At an online press conference, Garcia said hotels being used as quarantine facilities in Cebu are nearing full capacity.

In response to this, among the measures that were taken was to close Terminal 2 of the MCIA from May 14 to 15.

No international flights to land at MCIA on May 14-15 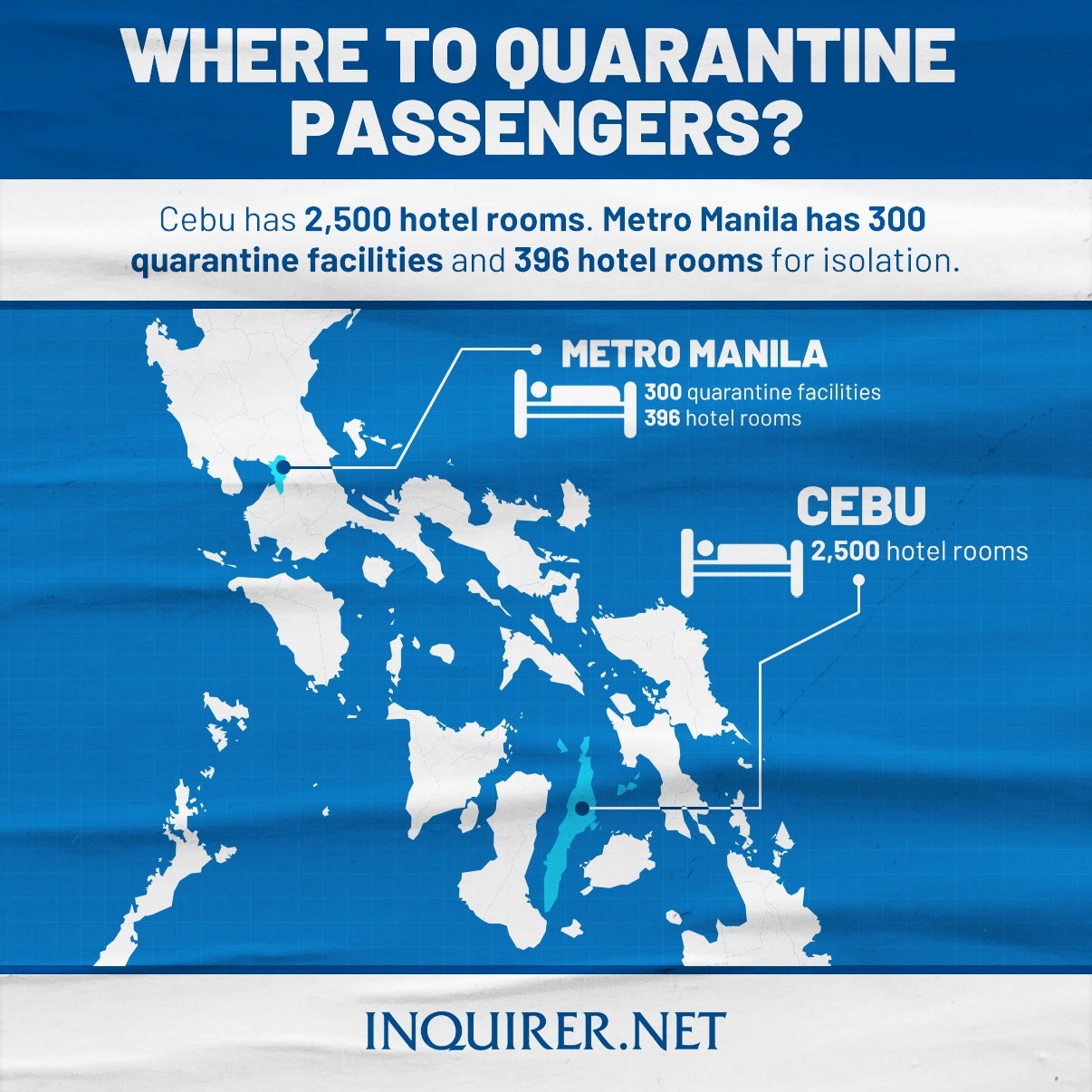 Cebu has 2,500 hotel rooms designated as quarantine facilities for OFWs and returning Filipinos, who are only transiting in the province. According to MCIA data, at least 37 hotels are being used for Filipinos, who are not OFWs, as of May 19.

In Metro Manila, at least 300 facilities had been given stamps of approval by the DOH’s Bureau of Quarantine.

At least 396 hotel rooms had been classified as suitable for quarantine in the Philippine capital.

FACILITIES INSPECTED AS OF MARCH 4, 2021

But recently, Loreche said there were enough isolation rooms in Cebu for arriving passengers.

She said some passengers, who are just in transit, had been released. OWWA, she added, is coordinating with the Bureau of Quarantine.

Rooms are being vacated by the release of passengers who are just transiting through Cebu, Loreche said, so there would be no problem about quarantine facilities.

Garcia had also urged the CAB to lift the cap on arriving international passengers.

More Filipino travelers from abroad expected to transit via MCIA

Data from the MCIA from January to April 2021 showed between 449 and 517 flights arrive at the airport every month.

Last February, the MCIA handled only 81 flights while last April, it handled more than 500. 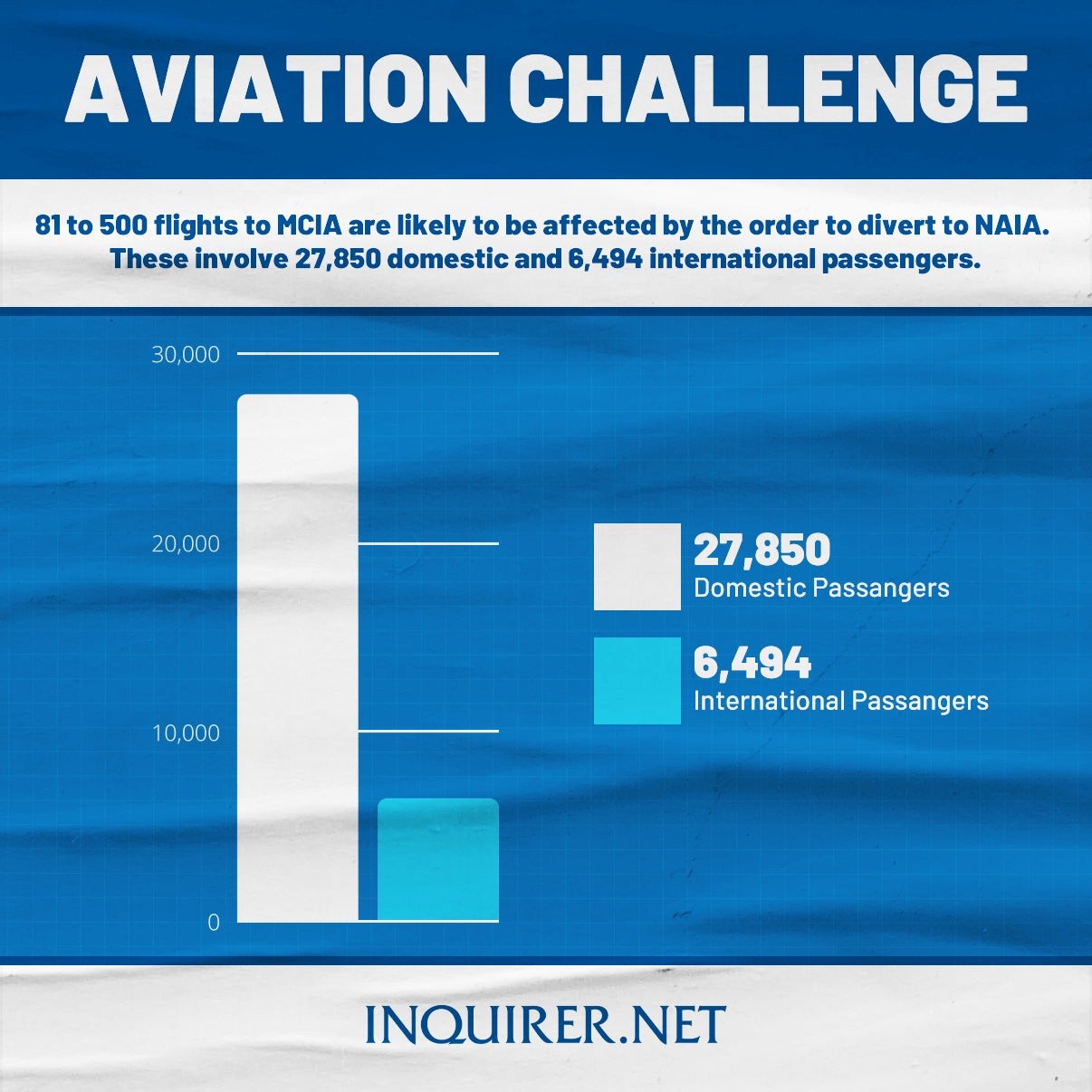 The order to divert flights away from the MCIA was seen to affect from 81 to 500 flights.

The order would also make the arrival of 27,850 domestic and 6,494 international passengers more arduous.

It’s not clear if passengers of diverted flights would incur additional costs but according to IATF rules, land transfers of returning Filipinos in Metro Manila would be free.

OFWs and returning residents, who had been cleared during tests, would be allowed to proceed to their final destinations through flights and buses chartered by OWWA.

Garcia said last week she had been informed about a legal action against her over her supposed refusal to heed the whole-of-nation approach in testing returning Filipinos.

She also made public another message from Velasco about Local Government Secretary Eduardo Ano being adamant that Cebu province heed IATF Resolution No. 114 on standards and processes of allowing entry to returning Filipinos.

“They are worried about transmission of variants,” read a text from Velasco revealed by Garcia. “Sec Harry and Meynard Guevarra is (sic) considering legal action against you,” read the text.

Garcia, however, said she does not believe Roque would sue her. “I know Secretary Roque. He has a very sharp legal mind. I doubt, in fact, if he is planning to institute legal actions,” she said.