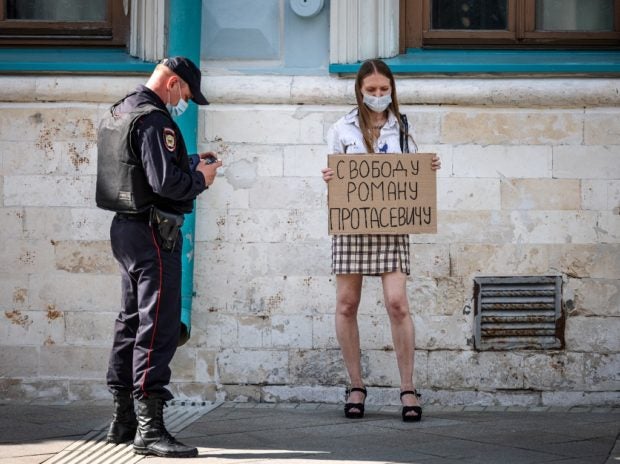 A woman holds a placard which reads ‘Freedom for Roman Protasevitch’ as she attends a single-person protest of solidarity with the jailed Belarusian opposition journalist in front of the Belarusian embassy in central Moscow on May 25, 2021. (Photo by Dimitar DILKOFF / AFP)

MOSCOW — Russia said Friday that Western countries were being irresponsible and endangering passengers by banning flights over Belarus in response to President Alexander Lukashenko’s forced grounding of a Ryanair flight.

“What the West has done by introducing a ban on flights through Belarusian airspace for political reasons is completely irresponsible and endangers the safety of passengers,” foreign ministry spokeswoman Maria Zakharova wrote on Facebook.

In response to the grounding of the European commercial jet, the European Union banned flights from Belarusian carrier Belavia and urged airlines based in the bloc to avoid flying over the ex-Soviet country.

“Politics in the European Union today is increasingly devoid of common sense,” Zakharova wrote in the post.

“It is time for Brussels to learn how to take effective measures to protect citizens against real, not imaginary, threats,” she added.

Foreign ministers of the Group of Seven wealthy nations on Thursday demanded the “immediate and unconditional release” of Protasevich.

Russian President Vladimir Putin is scheduled to meet with Lukashenko later on Friday in the Black Sea resort town of Sochi, in a symbolic show of support for the increasingly isolated Belarusian strongman.