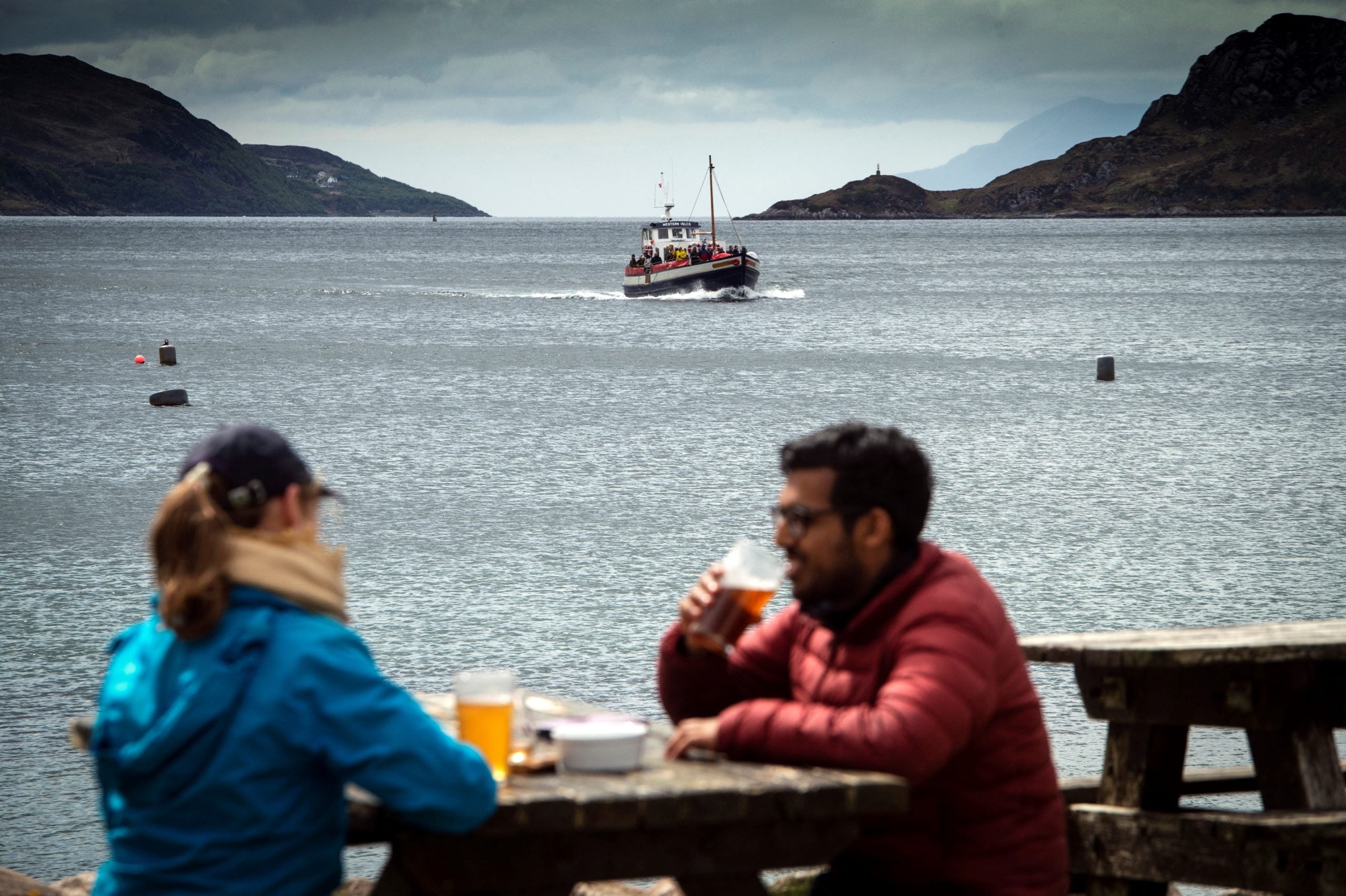 People sit and drink outside The Old Forge pub, owned by Jean-Pierre Robinet, as the ‘Western Isles’ ferry crosses Loch Nevis from Mallaig as it arrives in Inverie on the Knoydart peninsular in the Scottish Highlands on May 21, 2021. – The Old Forge pub in Inverie, western Scotland, is Britain’s most remote watering hole, situated in what has been described as the country’s “last true wilderness.” Just getting there requires a 30-minute boat trip or, for the more adventurous, an 18-mile (28-kilometre), two-day hike over some of the Scottish Highlands’ most rugged landscape. (Photo by ANDY BUCHANAN / AFP)

INVERIE, United Kingdom — The Old Forge pub in Inverie, western Scotland, is Britain’s most remote watering hole, situated in what has been described as the country’s “last true wilderness”.

Just getting there requires a 30-minute boat trip or, for the more adventurous, an 18-mile (28-kilometer), two-day hike over some of the Scottish Highlands’ most rugged landscape.

Arrivals in the tiny fishing village are rewarded not just with a pint but a spectacular view over Loch Nevis, which opens out towards the majestic Isle of Skye.

Now the pub is at the center of a potential local takeover to put it once more at the heart of the hard-to-reach community rather than rely on the seasonal tourist trade.

“It’s more than just a pub and a place to go and eat and drink,” local resident Stephanie Harris, 31, told AFP.

“It can act as a real hub for the community, a place where people can gather. A place where locals and visitors can meet and get together.”

Inverie, population just 90, has been Harris’ home since she was two, and the whitewashed, grey slate-roofed pub played an important part in her childhood.

“You would have birthday parties and Halloween parties and all that sort of stuff in it,” she said. “In such a small community you need a place like that.”

The bitterness is evident at an early evening gathering at a wooden shed beside The Old Forge.

Instead of going to the pub, the community frequently gathers around a log fire to socialize over drinks brought from the off-license.

They claim Robinet refuses to serve them and is more interested in attracting wealthy tourists to the pub’s restaurant, whose menu — and prices — are more comparable to a London gastropub than a traditional country inn.

The single-story, cottage-style pub, built in 1880 but which comes with its own helipad, is also closed throughout the harsh winter, which is when the residents say they need it most.

There are no other options: there are no roads in to or out of Inverie.

Robinet, a Belgian national who bought the pub nearly 10 years ago, rejected the locals’ claims about the Highland stand-off.

He said family commitments and Brexit — Britain’s divisive departure from the European Union — contributed to his decision to sell up.

“I am a democrat and I am a European,” he told AFP after the pub reopened on May 17 following closure due to coronavirus restrictions.

“I value how important it is in Europe to be stronger together and tolerant and open to the world, so if it remains like that it would be fantastic for the community to buy the pub and keep the spirit.”

The former chef said he places great emphasis on food at the 65-seat restaurant, as the area is rich in fresh, top-quality produce such as seafood and venison.

“I think it’s a great idea for the community to buy the pub, if — and only if — they will keep both feet on the earth and knowing the fact that what makes a good trade these days is food, not only beverage,” he warned.

“It’s also important to welcome tourism as good as you would welcome your brother and sister or locals.

“It’s very important to be fair to both of them, even if they have different opinions. Even if they come from other countries.”

Retired company director Jo Firminger, 60, is on the steering committee that is in the early days of trying to raise the cash to buy The Old Forge, using crowdfunding and public funding.

The Knoydart Foundation, which has owned much of the surrounding peninsula since the turn of the century, has forged a tradition of community-led projects.

Local-run schemes include a community garden and managing tourist accommodation such as the lochside campsite, as well as the village post office and shop.

Firminger said it seemed like “a no brainer” that the pub should also be taken on by local people.

“When you have only got a small number of people, it can be the center of the community,” she said.

“Particularly in the winter months, it would be great to have a facility that could still be used as a pub, and that is what is lacking at the moment.”