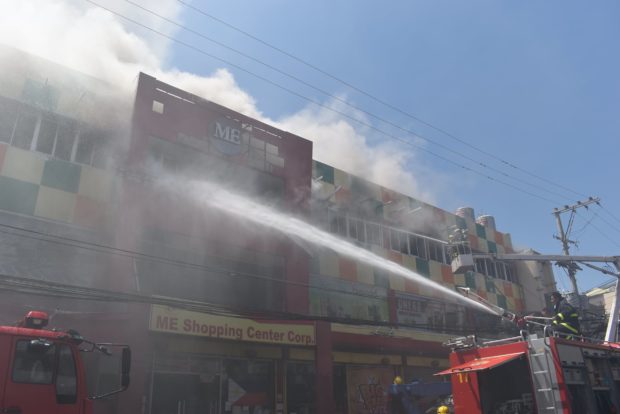 LAOAG CITY — Firefighters across Ilocos Norte joined forces to put out a seven-hour fire that ravaged Thursday, May 27, the upper portion of a shopping center in this city’s commercial area, authorities said.

Fire superintendent Floro Obrero, director of the Bureau of Fire Protection (BFP) in Ilocos Norte, told the Inquirer in a phone interview Friday that the blaze that reached the fourth alarm broke out on the third floor of the “M.E. Shopping Center” around 7:30 a.m.

He said the first firefighters arrived 10 minutes after the employees of the Laoag City government reported the incident.

BFP’s initial investigation showed that the fire started after an employee of the establishment “switched on a circuit breaker” on the third floor.

The upper portion of the establishment was used as a storage room, where general merchandise, such as items made out of plastic and light garments, were being kept, according to Obrero.

In previous years, a fire of such extent had occurred at least twice in the area where the business establishment stands, according to Obrero.

At least 20 firetrucks, including those from private entities in the province and neighboring Ilocos Sur, were used to put out the blaze.

The firefighters managed to control the fire, leaving other business establishments surrounding the mall undamaged, according to Obrero.

The BFP declared a “fire-out” officially at 3:20 p.m., with zero fatalities and injuries.

“Our firefighters remain on standby at the fire scene after occurrences of [fire] ‘rekindling’ happened at least twice after the declaration of the fire-out,” Obrero added.

The investigating officers of the BFP have yet to disclose the extent of damage from the incident, he added.

Earlier, the shopping mall had been cited for violating some provisions of the Fire Code of the Philippines, according to Obrero.

Obrero also appealed to residents to immediately report fire incidents to the BFP instead of posting them first on social media. INQ