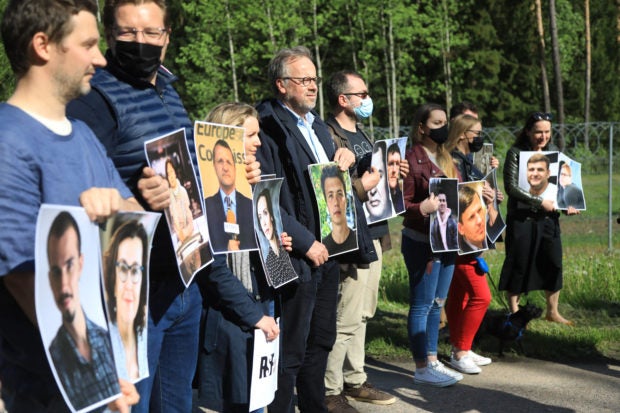 Secretary-General and Executive Director of Reporters Without Borders (RSF) Christophe Deloire (4L) poses with a photo of detained Belarus journalist Roman Protasevich while other activists pose with photos of other detained Belarus journalists to protest against the arbitrary detention of Protasevich and nearly twenty other reporters, at the Lithuanian-Belarus border in Salcininkai, Lithuania on May 27, 2021. (Photo by PETRAS MALUKAS / AFP)

SALCININKAI, Lithuania — The head of Paris-based Reporters Without Borders (RSF) protested on Thursday at the Belarusian border along with dozens of journalists after the arrest of anti-regime blogger Roman Protasevich.

RSF chief Christophe Deloire and the Belarusian and Lithuanian journalists placed portraits of their 21 colleagues imprisoned in Belarus on a fence along the EU border between Lithuania and Belarus.

Deloire called the government of Belarusian President Alexander Lukashenko, in power since 1994, “predators of the liberty of the press” and said the strongman was acting like a “terrorist”.

Reporters Without Borders this week asked Lithuanian prosecutors to investigate Lukashenko’s role in diverting the plane carrying Protasevich and his girlfriend Sofia Sapega on Sunday.

There has been no contact with either of them since their arrest except for two supposed “confession” videos released by Belarusian authorities.

“Lukashenko himself should be prosecuted, because what he has done, what he has clearly ordered and what he now justifies is plane hijacking with terrorist intentions and he is responsible,” Deloire, holding a photo of Protasevich, told AFP.

He said the international community should pressure on the regime to secure journalist’s release.

“We will not forget you, we will continue to fight for you,” Deloire said.

Standing at the border, Lithuanian journalist Sarunas Cerniauskas said this was “as close as we can get to the regime.”

“But we really want to come closer when it comes to exposing the things that are going on in Belarus and all the abuses of human rights and the abuses of power,” said Cerniauskas, head of an investigative journalism center in Lithuania.

Indre Makaraityte, who works for the Lithuanian national broadcaster, said: “Any dictator and any tyrant is afraid of publicity”.

On Monday, amid a growing international uproar over the grounding of the Ryanair flight, Lukashenko approved legislation that would ban reporters from providing real-time coverage of unauthorized mass protests.

Any Belarusian national — not just a journalist — is banned from covering an unauthorized rally or using crowdfunding to pay fines over the violation of legislation on mass gatherings, according to the legal amendments published by state media.

“We came here because we want to send a signal that we support the journalists in Belarus,” he said.