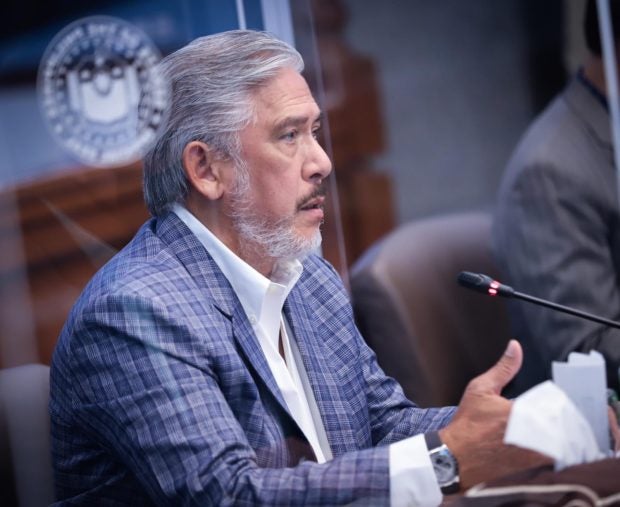 MANILA, Philippines — Several senators on Thursday rejected the latest moves by the House of Representatives to amend the 1987 Constitution, saying the changes sought by the purported “economic Charter change (Cha-cha)” are already being addressed by several proposed legislation.

Besides, Senators Vicente Sotto III, Franklin Drilon, Panfilo Lacson, Grace Poe, and Risa Hontiveros questioned the propriety of discussing amendments to the Constitution while the country remains gripped by the COVID-19 pandemic.

The senators issued separate statements against the proposed House Resolution of Both Houses No. 2, authored by Speaker Lord Allan Velasco, which was approved, via voice vote, on second reading on Wednesday.

The measure seeks to add the phrase “unless otherwise provided by law” to reverse the constitutional restrictions on several strategic industries that the Constitution reserved for Filipino citizens.

“The phrase will give Congress flexibility in responding to the needs of time. Congress may reduce, remove or restore the economic restrictions as may be called by the prevailing circumstance,” said Ako Bicol Rep. Alfredo Garbin Jr., chair of the House committee on constitutional amendments.

But Senate President Sotto said the Senate might no longer have time to “take a quick look into the proposal to amend the Constitution” and pointed out that several bills, which were certified by Malacañang as urgent, were already in advanced stages in the Senate.

Lacson agreed and said the so-called “restrictive economic provisions” in the 1987 Constitution are now being addressed by two bills, which the Senate is now trying to reconcile with existing jurisprudence.

Besides, Lacson said there was no compelling reason to justify amending the Charter, “without running afoul” of the constitutional provision on how Congress should vote to muster the two-thirds vote required to approve constitutional amendments.

“The senators assert that only the Supreme Court can interpret the provision to amend or revise the Charter. The problem is the absence of the cause of action that would trigger the court to act and resolve the matter,” he said.

Drilon, the Senate minority leader, expressed belief that senators were not inclined to support amendments to the Constitution “at this time.”

“[The matter] was not even in the agenda of the [Legislative Executive Development Advisory Council] meeting yesterday, which means it is not a priority legislation,” Drilon said.

Poe, on the other hand, said she was wary of a “piecemeal revision” of the Constitution, which, she said, is a “living document which holds the aspirations of the people.”

“It should only be revised under the strictest of scrutiny for the right reasons. You don’t just change it on a whim, especially now that everyone is fearful of a creeping invasion on our shores,” she said.

Hontiveros expressed dismay over the lawmakers’ “inclination to micromanage the entry of foreign investors, as if these were local franchise approvals.”

TAGS: 1987 Constitution, Cha-cha, Congress, Resolution of Both Houses No. 2