Delivery of 2.2 million doses of Pfizer COVID-19 jabs from COVAX moved to June 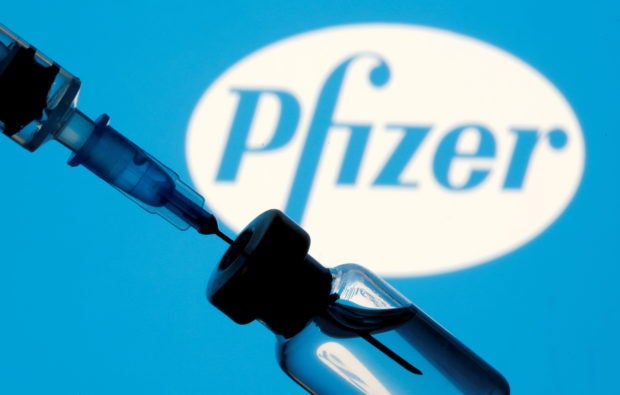 FILE PHOTO: A vial and sryinge are seen in front of a displayed Pfizer logo in this illustration taken January 11, 2021. REUTERS/Dado Ruvic/Illustration

MANILA, Philippines — The delivery of some 2.2 million doses of Pfizer COVID-19 vaccines expected this May from the World Health Organization-led COVAX facility has been moved to June, Secretary Carlito Galvez Jr., the country’s vaccine manager, said Wednesday.

“We had what we call a slip or there were vaccines that we expected in May that did not arrive,” Galvez said in a taped meeting with President Rodrigo Duterte.

“Then the Pfizer [vaccines] that were supposed to arrive in May will instead arrive in June. What’s good here is that we did not lose these vaccines. Their delivery was just moved to June 7 to 11,” he added.

Meanwhile, Galvez said 1.3 million doses of Sputnik V expected to arrive this month were slashed down to 300,000 doses.

Also arriving in June are more AstraZeneca jabs, also the COVAX facility, and some procured by the private sector, Galvez said.

“The Moderna vaccines will arrive more or less June 21 and the one million Sinovac vaccines more or less on June 6,” Galvez added.

The total doses of Sinovac’s CoronaVac vaccine that are expected to be delivered in June is 4.5 million.