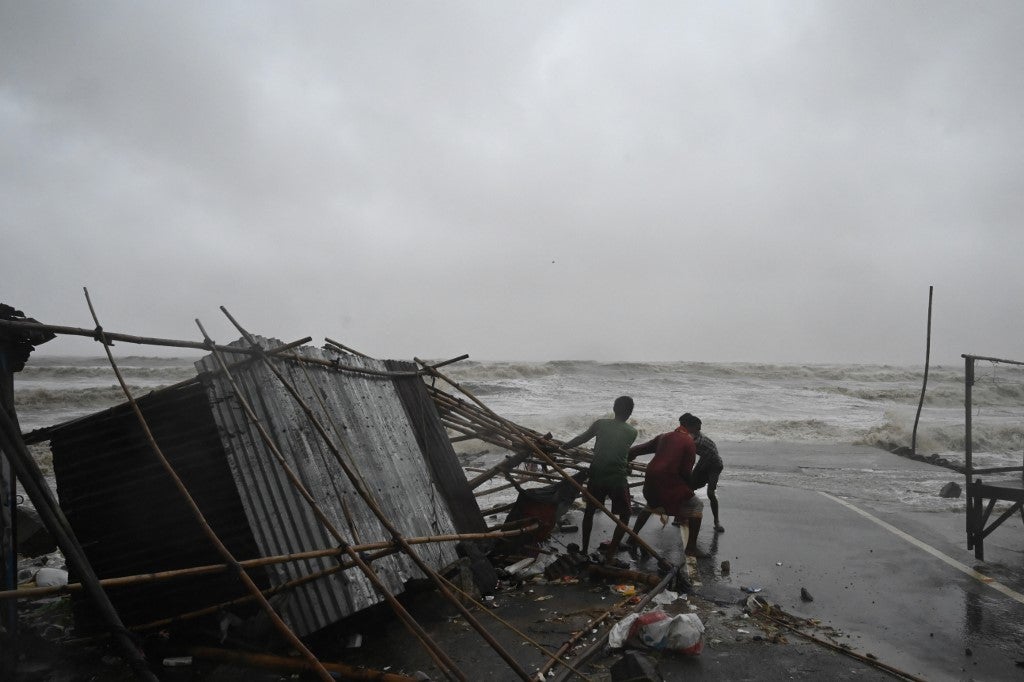 Residents shift structures of makeshifts stalls as water reaches a road at a beachfront area while strong winds batter Balasore district in Odisha state on May 26, 2021 as Cyclone Yaas barrels towards India’s eastern coast in the Bay of Bengal. (Photo by Dibyangshu SARKAR / AFP)

Cyclones happen regularly in the northern Indian Ocean but many scientists say they are becoming both more frequent and severe as climate change warms the sea.

Last week, Cyclone Tauktae claimed at least 155 lives including dozens of oil rig workers as it lashed western India, the fiercest to hit the area in several decades.

Now Cyclone Yaas has forced the evacuation of more than 1.5 million people in the eastern states of West Bengal and Odisha, killing so far two people.

West Bengal chief minister Mamata Banerjee said that the seaside town of Digha has been “swamped” by waves the height of a double-decker bus.

She said that two people had been killed including one dragged into the sea by the waves in Digha and another crushed when his house collapsed.

Nearly 20,000 houses were damaged and more than a dozen river islands were flooded with a number of embankments breached, she said.

The storm packed lashing rain and winds gusting up to 155 kilometres (95 miles) an hour, the equivalent to a category-two hurricane.

“I have never seen such a storm ever in my life,” said Purnendu Jana, a Digha resident. “The water may cross the main road for the first time.”

Local hotel owner Shiuli Das said: “Many of us are here, all of us are really scared.”

Officials fear the emergency will further complicate efforts to halt a surge in coronavirus cases that has now killed 310,000 people.

“This cyclone spells double trouble for millions of people in India as there is no respite from COVID-19,” said Udaya Regmi from the International Federation of Red Cross and Red Crescent Societies.

Some vaccination centers in threatened districts, as well as Kolkata, suspended operations and a special effort had been launched to ensure the supply of oxygen and medicines to hospitals, officials said.

Officials in neighboring Bangladesh, a regular target of cyclones, said they expected the low-lying delta nation to be spared this time.

Some of the deadliest storms in history have formed in the Bay of Bengal, including one in 1970 that killed half a million people in what is modern-day Bangladesh.