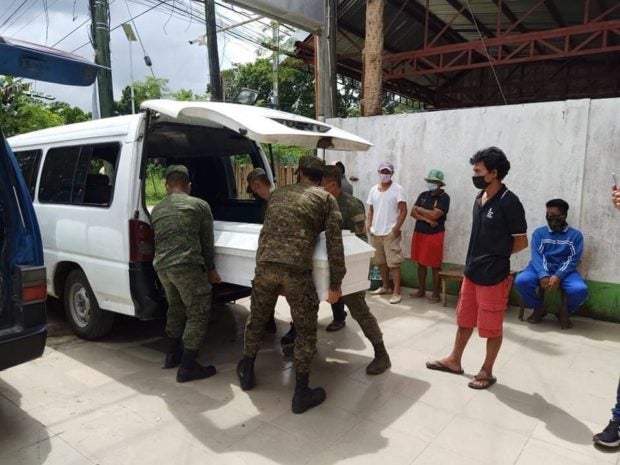 Government troopers carry the coffins of the five suspected rebels who were killed during an encounter with government troopers in Barangay Cabacnitan, Bilar town, Bohol on Tuesday, May 25, 2021. Photo courtesy of the 47th IB

TAGBILARAN CITY –– The families of the five suspected rebels, who were killed in an encounter with government troops in Bilar town, Bohol, have claimed the remains of their loved ones.

1Lt Elma Grace Remonde-Abulencia, civil-military operation officer of the 47th Infantry Battalion, said the corpses were brought to a funeral home in Sagbayan, so they would be given a decent burial.

Abulencia said NPA rebels, who died in an encounter, were usually abandoned by their comrades or buried in the forest without the knowledge of their families.

“And that is what our armies, especially our government, do not want from our countrymen who have only fallen victim to the false ideology of the communist terrorist. Our government is doing everything it can to provide for the needs of the family,” she said.

On Tuesday, Army troops were conducting security patrol when suspected NPA rebels shot them, leading to an exchange of gunfire.

The military said it recovered an M16 assault rifle, a pistol, a bandolier, a grenade, and 30 rounds of ammunition after the fight.

At least 53 families from Purok 7 in Sitio Langub fled the encounter site and transferred to the village hall or the homes of their other relatives.