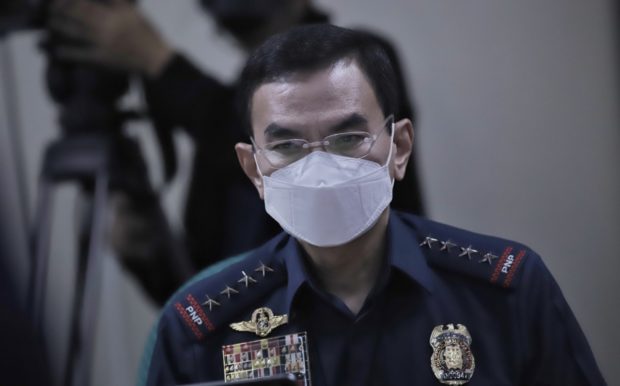 MANILA, Philippines — Philippine National Police (PNP) chief Gen. Guillermo Eleazar on Wednesday expressed willingness to provide the Department of Justice (DOJ) an access to the records of more than 7,000 people allegedly killed in police anti-drug operations if the department asks so.

“As long as the DOJ requested for the availability of this, we will provide them with this information,” Eleazar said over ABS-CBN News Channel when asked if they would provide the records of the rest of 7,000 who were allegedly killed in police operations aside from the records of 61 operations.

“Aside from those 61 cases that we have findings and we have filed administrative cases, binibigay namin sa kanila itong mga dokumentong ito, (we would give them these documents) that is the actually the guideline or the implied directive of our president through Secretary of Justice,” Eleazar added.

While only 61 police operations resulted  in the filing of administrative charge against police personnel, Eleazar said all incidents which involved suspect’s deaths were investigated by PNP’s Internal Affairs Service (IAS) “as mandated by law.”

“Practically all of those cases since 2016 have been investigated by IAS,” he said.

“Yun nga lang sa ngayon itong 61 cases ang masasabi nating na meron tayong findings, ang Internal Affairs Service [But as of now these 61 cases are the only ones that IAS] that resulted to filing of administrative charges against the operatives or the police personnel,” Eleazar added.

The police chief noted that they had concerns with available evidence as families of the suspects are not inclined to help the investigation.

“Of course we’ve heard so many allegations but most of the family of the victims or the suspects refused to [co]operate and give information to the police, yun ang pagbabasehan ng IAS [that is the basis of IAS] in the conduct of the administrative cases,” Eleazar said.